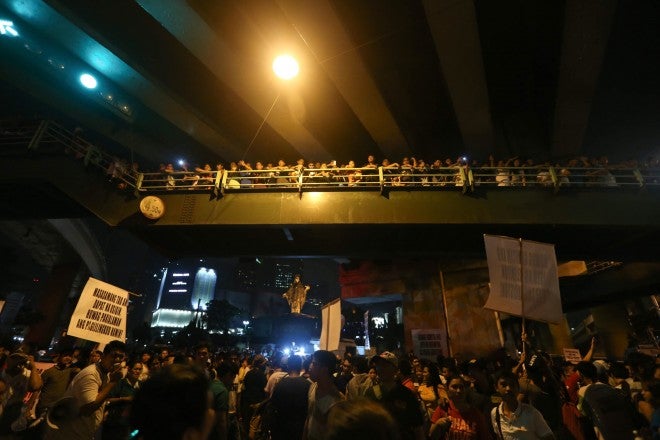 Few politicians have been critical of the INC, and some of the potential candidates for President and Vice President in next year’s elections are among those defending the group’s mass action.

A former lawmaker, however, said politicians placating the INC should be condemned.

“Politicians conciliating these fanatics must be condemned,” Bello said in a text message.

Bello said that while he has had differences with De Lima on certain issues, the justice secretary is right in extending protection and judicial remedy to INC members who feel threatened by the INC hierarchy.

“If a Roman Catholic priest is accused of sexual exploitation of minors, he would be subject to secular prosecution by the state and would never be allowed to invoke the separation of church and state principle to protect him from prosecution,” he said.

Interviewed in Nueva Ecija on Friday, Sen. Grace Poe, a potential presidential candidate, said people should not belittle the importance of religion.

“For me, those people are defending their faith. We respect that and they also have to protect their rights,” Poe told reporters.

She also said it would be good if De Lima would face the protesters and explain the situation.

“After all, those of us in [the] government have the responsibility to explain well to the people the reason for the steps we have taken,” she said.

Asked if she believed the DOJ should handle the case, she said the agency already had a lot on its plate.

She cited the Mamasapano clash, noting that while the incident had been investigated, nobody had been placed on the witness protection program.

Another aspirant for higher office, Sen. Ferdinand Marcos Jr., also came to the defense of the INC.

“The INC certainly has the right to stage a peaceful mass action to express their sentiments in defense of their faith,” Marcos said in a statement.

According to Marcos, the DOJ’s handling of the case “leaves much to be desired.”

He claimed that De Lima discussed the merits of the case, which he said created the impression of undue interest in the case, whether rightly or wrongly.

“For justice to triumph, the DOJ must not only be impartial in its procedure and ruling; like Caesar’s wife, it must also be seen as being fair to all,” he added.

Sen. Francis Escudero, Poe’s potential running mate, said in a statement issued on Thursday that the DOJ should not let the INC issue elbow out other cases that matter to the people.

Escudero said the DOJ’s INC investigation might be misinterpreted as an interference and infringement of the right to religious freedom guaranteed by the Constitution.

De Lima should uphold the principle of the separation of church and state, he said.

“It may be a prudent to first let the leadership of the INC resolve what appears to be a purely internal matter. We do not want to see division and misunderstanding during these times,” Escudero said.

The DOJ should instead make the Mamasapano case a priority, Escudero said. It should release its full findings so that those responsible for the deaths of 44 police commandos could be brought to justice, he added. Leila B. Salaverria