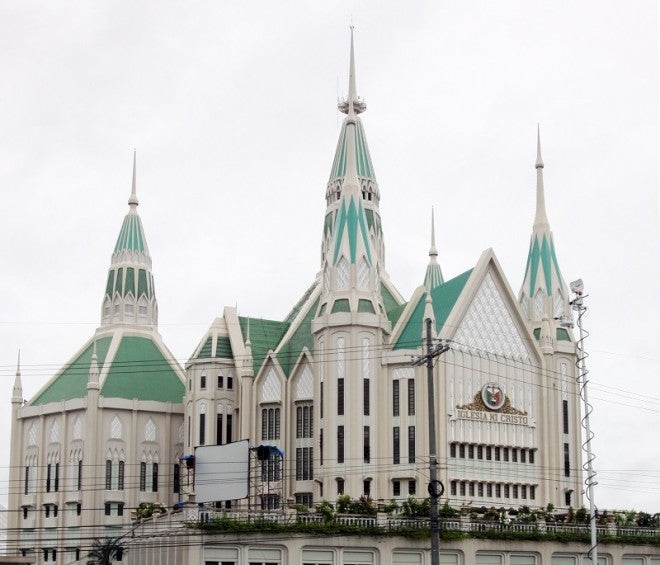 The Iglesia ni Cristo central headquarters is located along Commonwealth Avenue in Quezon City. With the ongoing infighting within the sect, some say politicians who are banking on the organization’s much vaunted bloc voting may be disappointed this coming elections. INQUIRER PHOTO

While one expelled minister is only fighting for justice, powerful church leaders are manufacturing a “revolution” as politicians pander to their whims, unaware that the prized bloc vote may well be no more.

Trixie Cruz-Angeles, the lawyer of expelled Iglesia Ni Cristo (INC) minister Isaias Samson Jr., has this to say amid the continuing protest of church members on Edsa, generously granted a permit to occupy a major Metro Manila thoroughfare for a third day despite widespread complaints from the public.

“This means that this began as a crisis within the church. And there appear to be political opportunists who would like to cast this as something else,” Angeles told the Inquirer on Saturday.

“If the Sanggunian wants to use government to ratify their patently illegal acts, given the elections, doubtless they will find officials willing to go so far for them. As in fact, there already are,” said the lawyer, when asked if she saw a greater political agenda behind the protest.

Members of the sect are known to strictly follow directives of the church leadership under the INC’s tenet of obedience under the threat of expulsion, and thus are able to deliver bloc votes to anointed politicians.

INC members began to mass up outside the Department of Justice (DOJ) offices on Padre Faura in Manila on Thursday, claiming bias against Justice Secretary Leila de Lima for accepting for investigation Samson’s complaint of detention, harassment, threats and coercion against members of the powerful Sanggunian, INC’s highest administrative body.

The former editor in chief of INC’s official publication Pasugo (God’s Message) filed the criminal charges after the Sanggunian allegedly held him and his family under “house arrest” in July amid suspicion that he was behind accusations of corruption and wrongdoing against the church leadership published online. He denied the allegations.

The protesters then moved toward Edsa in Ortigas at rush hour on Friday, occupying a site where previous popular revolts had toppled presidents: The late strongman Ferdinand Marcos in 1986, and ousted president and now Manila Mayor Joseph Estrada.

For her client, Angeles said the protest was the Sanggunian’s way of trying to protect themselves.  She had said in an earlier interview that those behind Samson’s abduction were “running scared,” aware that they faced “serious jail time” for the charges.

“On the part of Sir Jun Samson, all he is doing is saving the church from its wayward leaders.  These leaders on the other hand need some outside help and the only way to do that is to cast this as something revolutionary,” Angeles said.

Asked about politicians who are riding on the issue, Angeles said they may be banking on expectations that the INC may no longer be able to deliver given the continuing crisis.

“They don’t realize that the church is divided now.  The much vaunted bloc voting may not materialize anymore,” the lawyer said.

“If this (situation) continues, we may be looking at the end of the bloc voting influence the church has wielded. Its leaders have cooked their own goose. Ironic that their greed has led to this,” she added. Tarra Quismundo/RC