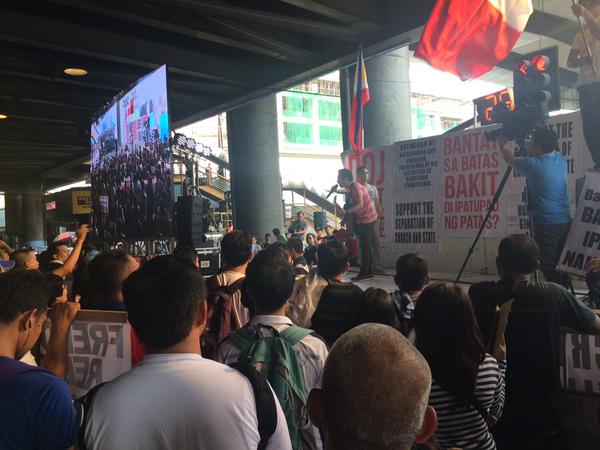 The protest of Iglesia ni Cristo (INC) entered its third day on Saturday on Edsa-Shaw, one of the main thoroughfares in Metro Manila after the Mandaluyong city government granted it permit to continue.

As of 11 a.m. Saturday, the Eastern Police District estimated a crowd of 700 at the Edsa Shaw Boulevard. Edsa-Crossing was closed to traffic.

A stage was set up at the intersection of Edsa and Shaw. As of posting time, a mini concert was ongoing.

At least three LED screens were also put up around the rally site.

“There is no program flow. Our guests keep on coming,” one of the organizers said.

He said their group is calling for the “separation of Church and State.”

Justice Secretary Leila de Lima is accused of supposedly meddling in the organization’s internal affairs, after she ordered an investigation on the illegal detention case filed by a dismissed church leader against his fellow leaders.

The protests started on Thursday at the Department of Justice in Padre Faura in Manila and later moved in EDSA on Friday, which irked commuters as it caused a massive traffic jam aside from being a payday, start of a long weekend and a mall sale nearby.

As of Saturday, the Ortigas-Shaw southbound was closed to traffic and all motorists could only use the Shaw underpass which has caused moderate traffic.

The permit issued to the protesters says they could only assemble until Sunday, but no exact time was given.

Businesses up, but not so much

Judy Pelaez, a snack vendor positioned along Shaw Blvd., said sales have inched up only “a bit” since the INC crowd started massing up here Friday evening.

“Nagpunta kami talaga dito nang malaman namin na pupunta sila (We came here as soon as we found out that they were going to mass here),” Pelaez, a mother of nine, said.

“Kagabi may pa-Jollibee pa. May baon ata sila (Last night they distributed food from Jollibee. It seems that they brought food with them),” she added.

“Kagabi may mga taga-Pampanga pa daw eh. Sabi nila ngayon, babalik ‘yung mga kasama nila mamayang hapon (Last night even those from Pampanga joined them. They said that more will participate later in the afternoon),” Pelaez said.
Edsa is a site of large demonstrations in the past. Two of these massive demonstrations unseated presidents. Frances Mangosing, John Roson/IDL