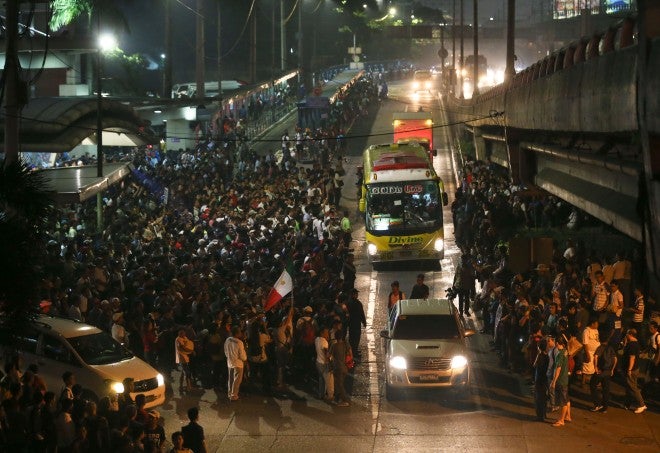 The Iglesia Ni Cristo (INC) protest may continue until Sunday after the Mandaluyong city government has approved the religious organization’s permit to rally on Edsa on Saturday morning.

Chief of the city’s Public Information Office Jimmy Isidro said the Mandaluyong local government granted the INC’s request to hold a protest on Edsa, on the condition that they will be only allowed to converge on Edsa-Crossing on Shaw Boulevard.

Isidro said the permit was issued to “contain” thousands of INC protesters who had occupied parts of Edsa Ortigas and Shaw Boulevard, in front of Edsa Shrine and SM Megamall Fashion Hall since Friday afternoon.

The permit, which was signed by City Administrator Ernesto Victorino, said the INC members could only assemble in the area until August 30, Sunday with no exact time given. The city government will also implement detour routes on Edsa.

Isidro said the INC, through a certain Brother Valle, applied for the permit on Friday.

From the Department of Justice office in Ermita, Manila, an estimate of 4,500 INC followers trooped to Edsa as they called for the DOJ’s dropping of the investigation on the alleged kidnapping of expelled INC ministers.

The protesters, who had started massing up outside DOJ along Padre Faura Street on Thursday, were demanding for a separation of church and state as they accused Justice Secretary Leila de Lima of meddling in INC’s internal affairs. Julliane Love de Jesus, Jovic Yee/IDL