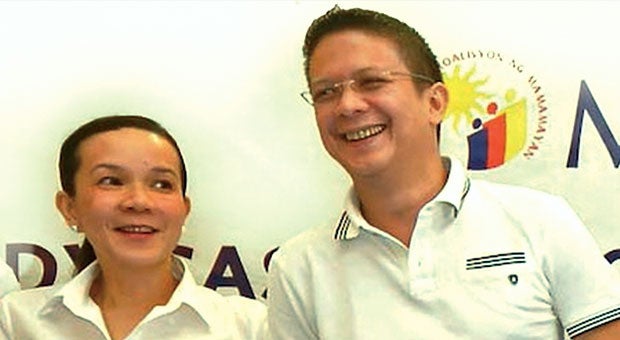 SENATORS Grace Poe and Francis “Chiz” Escudero emerged as the voters’ top choice for president and vice president, respectively, based on the latest survey conducted by the Magdalo Group.

The result of the survey conducted among 2,937 respondents nationwide from August 11 to 13, 2015 was released to reporters on Tuesday by the office of Senator Antonio Trillanes IV, ex-officio chairman of the group. The survey had a margin of error of 1.8 percent.

Of the 10, only Binay and Roxas have officially declared their presidential bids next year while Santiago, Lacson, and Cayetano have publicly expressed their desire to run for president.

In a three-way fight for president , Poe still topped the survey with 44.8 percent, followed by Binay with 28.9 percent and Roxas with 22.6 percent.

In the vice presidential survey, Escudero was the voters’ top choice with 53.8 percent, followed by Trillanes with 22.6 percent, Batangas Governor Vilma Santos with 16.2 percent and Cayetano with 5.3 percent.

Of the four names on the list, only Trillanes has publicly declared his vice presidential bid in 2016.

“In this pre-election survey, we created a scenario with 4 possible candidates who, based on information gathered, are perceived to be making plans to run for vice presidency next year,” said Congressman Francisco Ashley Acedillo, Magdalo representative, in explaining the result of the poll.

“We asked, “If elections would be held today, who among the possible candidates would you vote for?” Senator Chiz led the race with 53.8 percent of the respondents favoring him, followed by Senator Trillanes with 22.6 percent,” he said.

Acedillo said the group has been conducting surveys since 2006, which they used for campaign planning and policymaking.

The group earlier endorsed Poe’s possible presidential bid though she has yet to decide whether or not to seek a higher post next year.