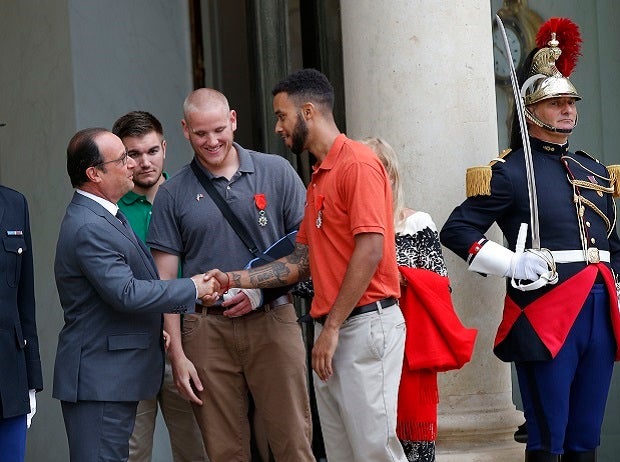 French President Francois Hollande, left, shakes hands with Anthony Sadler, a senior at Sacramento State University in California, as US National Guardsman from Roseburg, Ore., Alek Skarlatos, second from left, and US Airman Spencer Stone, third from left, look on outside the Elysee Palace in Paris, France, after Hollande awarded them with the French Legion of Honor on Monday, Aug. 24, 2015. The three American travelers say they relied on gut instinct and a close bond forged over years of friendship as they took down a heavily armed man on a passenger train speeding through Belgium on Friday, Aug. 21. AP

SAN FRANCISCO — So what do you do when a trip on a high-speed train in Europe suddenly turns you and your buddies into international heroes?

Perhaps yes to all three, eventually, but not just yet for the three American men who earned the thanks of many nations on Friday when they tackled and subdued a gunman on a train traveling from Amsterdam to Paris.

For now, US Airman Spencer Stone, 23, is in Germany for military observation and treatment. Oregon National Guardsman Alek Skarlatos, 22, is at his side. The third man, Anthony Sadler, 23, is scheduled to start his senior year at Sacramento State on Monday, although university officials are waiting to confirm when he will return home.

Sacramento State President Robert S. Nelsen said eager donors are lining up to help Sadler with scholarship money for his last year studying kinesiology. The university is thrilled, he said, to have such a courageous man on campus.

As would the City of Sacramento, which is planning a parade for all three men, who grew up in the area. Besides Sadler, Stone and Skarlatos grew up in nearby Carmichael, California. In fact, the three friends likely won’t lack for invites to fetes and parades, big and small.

“We’d like to invite them to a rally to honor them and give them time to interact with current students,” said Trent Allen, spokesman for the San Juan Unified School District in Sacramento County, California, where Skarlatos and Stone attended high school. “That’s on our wish list.”

Skarlatos, who moved to Roseburg, Oregon, as a teenager, returned from deployment to Afghanistan in July. He is studying at the local community college and hopes for a career in law enforcement, said his stepmother Karen Skarlatos.

He plans to stay in Germany with Stone until he is released, she said Monday. Then they’re being flown straight to New York, where she assumes they will sit for interviews.

“They really want to have a day that they can have to themselves in Germany, but whether or not they’re going to get that, I don’t know,” Karen Skarlatos said.

The friends had met up in Europe on vacation and were on their way to Paris by train when they spotted a man carrying an automatic rifle. In a tale now recounted around the world, Stone tackled the man, Skarlatos wrestled the gun away, and all three beat him unconscious. A fourth man, a Briton, helped tie up the gunman.

The gunman has been identified as 26-year-old Moroccan Ayoub El-Khazzani and is being questioned by French counterterrorism police outside Paris.

On Monday morning, the men received France’s highest honor from President Francois Hollande, along with a kiss on both cheeks.

Sadler “is an international hero, and so are his two friends,” said Nelsen, the president of Sacramento State. “They are longtime friends, they did something that took incredible courage, and I think all of us can learn something from them.”