Farmers were supposed to have started planting rice in July but had to postpone due to a contractor’s failure to complete the World Bank-assisted rehabilitation of the Upper Chico River Irrigation System (UCRIS), which serves 15,528 hectares of rice land in the province.

Because Ineng’s wrath damaged the irrigation facility, farmers said they could no longer complete the rice cycle that should have started in July and which would have allowed them to harvest by December.

Tabuk farmers yield as much as P1 billion worth of rice during a planting cycle.

According to the National Irrigation Administration (NIA), the contractor of the P425-million UCRIS project had not installed the proper controlling machines, so NIA could not close the intake gates as Chico River water rampaged and flooded most farms.

Until Saturday, the NIA tried various methods to stop the flow of water from flooding several villages in the city, said Benito Espique, NIA provincial officer.

But a missing radial gate and “immovable sluice gates” frustrated the NIA’s efforts to divert water entering the intake gates toward the Chico River at the height of Ineng’s fury.

The wasteway (the channel that is opened to release excess water flowing to the irrigation system) in Calanan village was open but river water in the canal continued to rise, Espique said.

As a last resort, he said, operators tore a hole near the wasteway to relieve the canal.

But the hole grew so wide it diverted all the water in the canal into the Chico River, leaving the entire downstream of the UCRIS dry, Espique said. 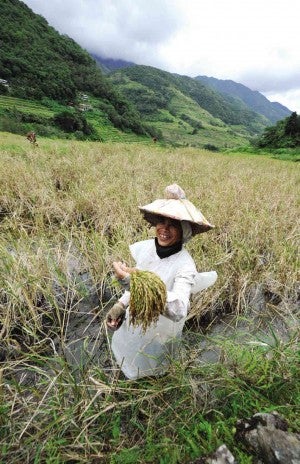 AN IFUGAO farmer completes her rice harvest at the Hapao rice terraces in Hungduan town, Ifugao province. Typhoon “Ineng” dumped rains in Ifugao but did not spoil the harvest, which was almost done this week. EV ESPIRITU/INQUIRER NORTHERN LUZON

Had the radial gate been in place, all NIA would have done was shut it down “and we could have slept soundly last night even with the swollen river,” he said.

Michael Lumas-i, chair of the Upper Chico River Irrigation System Federation of Irrigators’ Associations, petitioned the NIA last month to resolve the UCRIS delay, saying it had stalled the start of planting. The gates should have been installed last year.

“They took the river for granted so what we feared happened,” Lumas-i said.

Espique confirmed that the contractor underestimated the power of the Chico River.

“We were telling them that the river could be massive. They did not expect it to be this big. They should have anticipated everything. They might have thought they could manage the river,” he said.

The contractor has declined requests for interview.

Espique said the NIA may attempt to make repairs, but Lumas-i said they had lost too much time and would resume planting in January instead. Estanislao Albano, Inquirer Northern Luzon Contributor