Mindanao peace process gets caught up in national politics 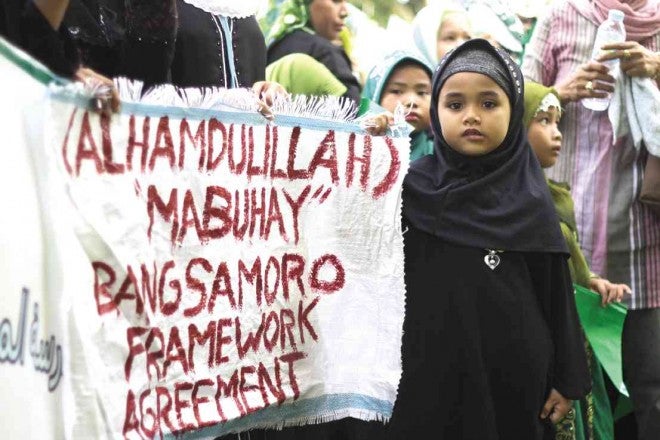 A CHILD carries a streamer expressing support for the peace process in a rally attended by thousands of residents in Cotabato City last year. KARLOS MANLUPIG/INQUIRER MINDANAO

Because of this, the peace process got caught up in the dynamics of national politics when the 2010 elections beckoned.

The same pattern is emerging today with the effort to enact the Bangsamoro Basic Law (BBL) in Congress.

Just like in 2008, many Filipinos still lack understanding about Mindanao’s history and sociopolitical dynamics hence they have a low appreciation of the nuances of the peace process. This is also the reason for the persistent bias against the Moros.

This makes the process vulnerable to attack by politicians who pander on the public’s fears and prejudices to score popularity points.

Candido Aparece Jr., spokesperson of the Mindanao Civil Society Organizations Platform for Peace, likens the tragic Jan. 25 incident in Mamasapano, Maguindanao province, to the MOA-AD debacle in 2008 in terms of its impact on peacemaking in Mindanao.

“Both rocked the peace process, even raised doubts about its intended outcome. But thanks to the steadfast commitment of President Aquino, the process is kept afloat even as it sailed through rough waters,” Aparece noted.

Whatever fate the peace process has in the remaining months of Mr. Aquino, the next President would play a crucial role in moving it forward, said Basilan peace activist Allan Pisingan of Bantay Ceasefire.

While the four personalities leading the presidential opinion polls uphold the broad goal of achieving peace with Moro rebels, each one has distinct takes on the more concrete issues, like the BBL.

Both Interior Secretary Mar Roxas and Vice President Jejomar Binay were involved in efforts to strike down the MOA-AD before the Supreme Court in 2008.

Roxas was then a senator and Binay was Makati mayor.

Today, Roxas has vowed to pursue the peace process along the direction already set by President Aquino, although he is still silent on other related issues. Binay has hit the BBL in the process of venting his tirades against the administration after failing to bag Aquino’s anointment for President.

In her report on the Senate probe of the Mamasapano debacle, Sen. Grace Poe chided government peace negotiators for imbibing a “wanton excess of optimism” over the BBL.

While she was widely lauded for taking an independent stance on the tragedy, many were also surprised at her prejudging the proposed BBL as it was not the subject of the Senate probe.

Davao City Mayor Rodrigo Duterte, the lone Mindanaoan who has not yet decided to run for President, has issued varying remarks about the BBL, at one time describing it “a crazy idea.”

“Of course, nothing is still definite beyond these public postures as presidential wanna-bes adjust their anchors to the fluidity of the political situation,” said Aparece.

One thing is certain, for now —the Kolambugan people will continue to remember the day of the attack, Aug. 18, 2008.