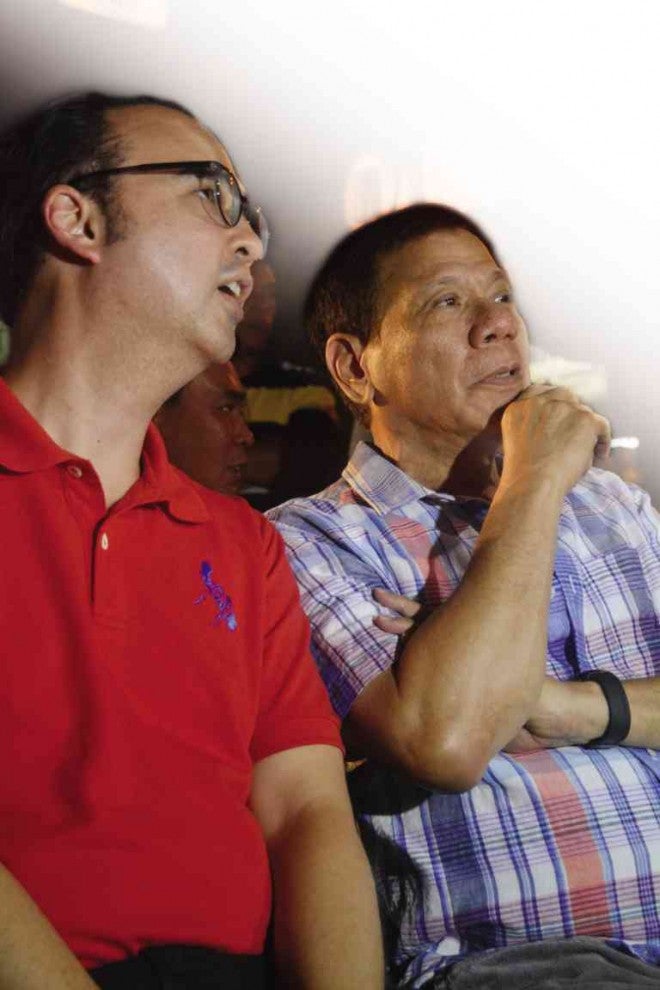 SEN. ALAN Peter Cayetano and Davao City Mayor Rodrigo Duterte talk at the opening of Kadayawan, Davao City’s annual feast, in a meeting that was taken as a sign of an emerging Duterte-Cayetano tandem for 2016. GERMELINA LACORTE/INQUIRER MINDANAO

Duterte has repeatedly said he was not interested in running for higher office, most likely President, in 2016 because of lack of funds, the opposition of his children, particularly former Mayor Inday Sara, and his old age. Duterte is now 70.

But while he keeps denying he is running for President, he has been going around the country and has been talking with individuals known to be political players.

At a visit to Mlang, North Cotabato early this month, Duterte said he was recently called to a meeting by five businessmen, who told him they were willing to bankroll his presidential bid. Duterte did not identify them by names but said they were known to be big election spenders.

He said he had told the businessmen to focus their attention on those who were willing to run for President.

In a talk with reporters, however, following a speech, Duterte admitted he had told those pushing him to run to wait a little more.

He said he was just waiting for a sign from God before deciding with finality.

“The presidency is destiny. If God wants me to be President, then so be it,” he said.

“As of now, everybody is waiting for his declaration. I think it is high time he makes public his real intention so the people will know. A lot of people want to support him,” Pimentel told reporters here.

He said with widespread support for Duterte’s possible candidacy, the mayor has a good chance to win in the 2016 presidential elections.

“I cannot see anyone from the party going against Digong (Duterte’s nickname),” he said.

Pimentel said among the possible candidates, only Duterte has a clear platform on peace and order, insurgency, corruption, agriculture and other issues.

Duterte has been batting for the restoration of the death penalty as a crime deterrent.

He is also now the face of a shift to federalism to address the Moro and communist rebellion.

Duterte had also called for free irrigation to farmers and tax exemption for those earning P25,000 or less.

“That’s why he should be supported by the people. He will bring good things to the Philippines,” Pimentel said.

Duterte’s strategists said the mayor is definitely running and that he was only waiting for the right time to make an announcement.

They also said that Duterte would not have difficulty finding a running mate while his potential rivals are still unable to find one.

During his visit here on Thursday, Sen. Ferdinand Marcos Jr. said he was “open to a possible tandem with Mayor Rodrigo Duterte in the May 2016 elections.”

“Whatever position Mayor Duterte would want, I would support him. We still have seven more weeks to go and it’s a long time. Many things could still happen,” said Marcos, son of the late dictator and his namesake Ferdinand Marcos.

Sen. Alan Peter Cayetano also earlier said that “Duterte’s case is unique because there’s a genuine clamor from the people asking him to run.”

Cayetano said he has no idea yet who Duterte would pick as running mate, but the Nacionalista Party could form a formal political alliance with the mayor in 2016.

Cayetano had announced plans to run for President, too, but is expected to slide down to the vice presidential race. Allan Nawal, Inquirer Mindanao