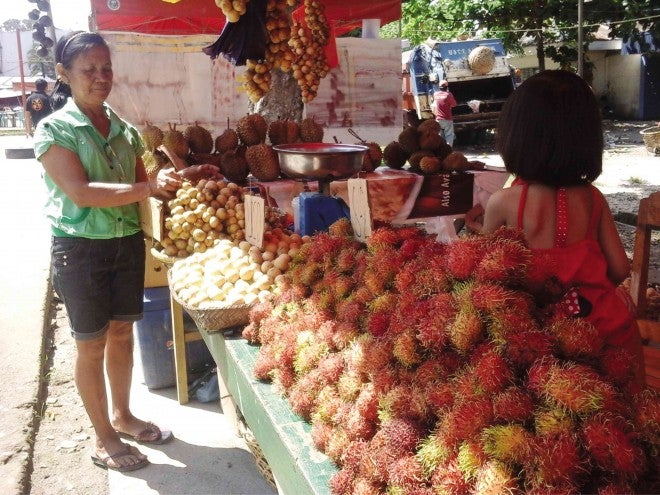 KIDAPAWAN CITY—“The harvest season is back. Now I can truly say that we are again the fruit basket of North Cotabato,” Manang Bening, a fruit vendor here, said as she sorted out sacks of rambutan newly delivered to her stall by a supplier.

Bening, 57, said for the past 10 years, she and other fruit vendors here had struggled to replenish supply.

“It was because there were simply not enough fruits. So we have to rely much on such imports as Chinese apples to make our stalls real fruit stalls,” she said.

“I even had to put on display processed foods we got from other areas so we can continue to exist as vendors,” Bening added.

In 2005 alone, he said there was barely any harvest from more than 10,000 hectares of land planted to durian, lanzones, mangosteen and rambutan.

“So we have to forego Timpupo, the annual fruit harvest festival, that year,” he said. Timpupo is Visayan for harvest season.

Evangelista said a study pointed to the operations of banana plantations in parts of the city and in nearby North Cotabato towns of Magpet and Makilala as the culprit.

“They get much water from the ground,” he said.

“We really got affected when the plantations came in,” North Cotabato Gov. Emmylou Taliño-Mendoza said.

Officials of the affected areas decided to act. Local government units started to limit the operations of banana plantations. Fruit trees were distributed.