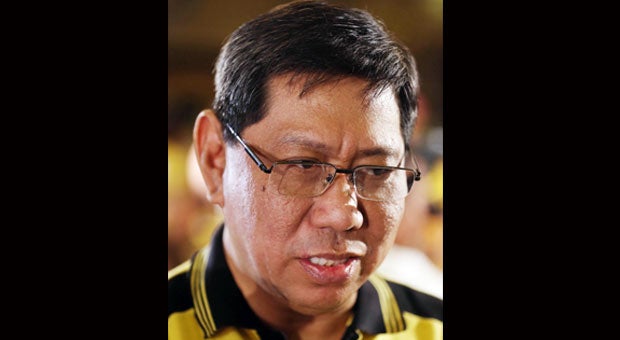 Caloocan Rep. Edgar Erice has taken matters into his own hands and has personally texted Senator Grace Poe for a meeting about her plans for the 2016 elections.

The Liberal Party (LP) official said he texted Poe and asked for a meeting to also assure her that he was not behind the actions of Rizalito David who filed disqualification cases against Poe before the Commission on Elections and the Senate Electoral Tribunal over her citizenship.

Erice also texted Poe to advise her regarding her readiness for the 2016 presidency, as LP bet Interior Secretary Manuel “Mar” Roxas II is set to gun for the position.

“Sen. Grace (ma’am). May I respectfully seek an audience so I can personally assure you that I am not part of those who (question) your being a Filipino, as being maliciously peddled in the social media. I have some information that I can share with you regarding this,” Erice’s text message to Poe read.

“I made it clear in my other comments that it should be taken as an (advice) and advocacy rather than criticism. Last year, I was the first one who (espoused) the idea of a (Mar-Poe) tandem as the perfect team and up to now it is my belief. I am sorry but it is my opinion that you are not yet ready for the presidency, but I will respect whatever will be your opinion and decisions. After all, we are accountable for whatever we say or do as (public officials),” the text message further read.

“We can agree or disagree on issues but I will always respect you. Thanks (ma’am),” Erice concluded.

Poe seemed to have dumped Roxas’ offer to become his running mate when she told him in a meeting Sunday night that he has other options for vice president.

In an interview Monday, Poe confirmed that Roxas visited her at her home in San Juan City on Sunday night, and that among the things they discussed was his offer for her to be his running mate.

Previously, Roxas also made an appeal to Poe on national television for her to be his vice president.

“I told [him] he had many potential vice presidential candidates to choose from,” Poe said.