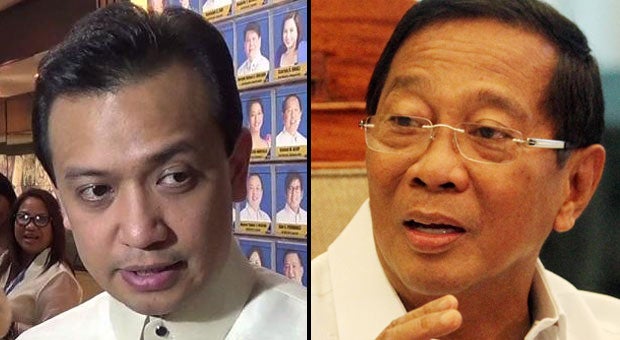 It’s an anniversary marked not with an exchange of gifts, but with a trade of sharp words.

As the Senate blue ribbon subcommittee marked the first year of its probe into corruption allegations against Vice President Jejomar Binay, one of his spokespersons said that only one person is getting a thrill out of it.

(Senator Trillanes seems to be the only one enjoying this because no one appreciates what he’s doing, which is purely hurling allegations without proof.)

Trillanes initiated the Senate probe, which has exposed alleged corrupt practices of Binay and his family from the time he was still the mayor of Makati City.

The resumption of the hearing on Thursday will reportedly focus on the ‘ghost’ senior citizens in Makati.

Trillanes claims that records of the National Statistics Office (NSO) show that 30,000 names from the more than 60,000 registered senior citizens in Makati are either dead or nonexistent.

Quicho, however, said that the registration of senior citizens in Makati follows a process of personal appearance and cross checking from the city’s social welfare department.

(The benefits received by senior citizens, especially cash benefits, should be received personally. If the city distributes cash, it is clear that the recipients should get it personally.)

All bark, no bite

Trillanes said in a separate interview with Radyo Inquirer that a year into the probe has proven that Binay is corrupt.

(The Senate investigation proves that VP Binay is corrupt and in a large scale. We are talking of massive corruption here; he would take money from any means possible.)

(So hopefully, the people have known him better and hopefully won’t make the mistake of electing him as this country’s leader. We should also not stop until he is jailed.)
The spokesperson said that the senator was all “all bark and no bite,” and dared him to file charges in the proper forum.

(Senator Trillanes is all bark, no bite. He always does interviews with the media, but when challenged to meet in court, he gets nervous and acts as if he is losing sleep over it.)

(Senator Trillanes, let’s take to the court all your brave claims outside the Senate. Let’s not display our arrogance anywhere. Let’s do it through the right process. It’s a challenge putting up with you because you are only confident in front of the media. But when dared to follow the right process, you always seem nervous.)

Quicho said that the Senate hearing, which has dragged on for a year now, only fuels Binay’s resolve to serve and exposes his rivals’ shortcomings.

(We are sensing a pattern in the Senate investigation: The rivals of Vice President Binay are only undermining the good programs he instituted for the poor because they cannot do the same. So instead of highlighting the good actions and experiences of the Vice President, they are only disparaging him.)

(We have been hurt for a year now. But as they say, the more he is hurt, the more Vice President Binay becomes braver, the more he is inspired to continue the service he has shown in Makati to the entire Philippines.) Ivan Angelo L. de Lara