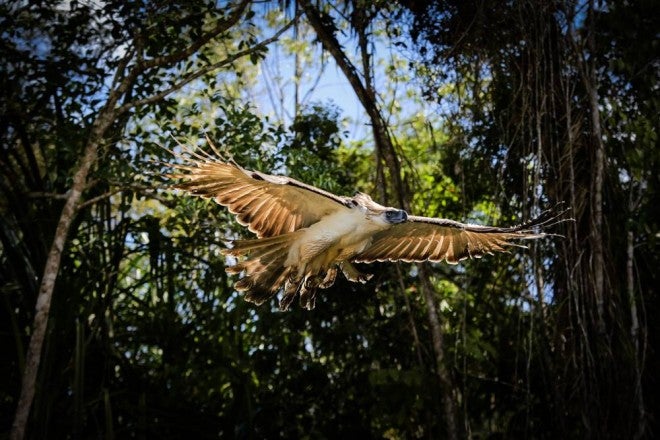 “Unfortunately, there’s this man with a gun who thinks that apparently, he can shoot anything and did this,” Salvador said in an interview on ABS-CBN News Channel.

The endangered Philippine Eagle was released from captivity on June 12 at the Mount Hamiguitan Range Wildlife Sanctuary in Barangay (village) La Union in San Isidro town in Davao Oriental province.

The PEF said Pamana was found in an advance state of decomposition.

Based on Pamana’s remains, it could have died on August 10.  Its body had an approximately 5mm puncture wound when they found her last August 16 after days of searching in the forest, the PEF added.
A tiny metal fragment believed to be from a shattered gun pellet was also retrieved from Pamana’s remains. PEF veterinarian Dr. Ana Lascano said that the bird “suffered from gun shot wound leading to possible trauma.”

Pamana was monitored by the PEF since her release on June 12 with a miniature transmitter harnessed in her back. On August 10, the radio transmitter went into “mortality mode”—which meant that the unit has not moved for six hours—the PEF deployed a team to locate the bird.

In 2012, Pamana was rescued by the PEF after surviving two gunshot wounds as an eaglet at the mountain range of Gabunan in Iligan City, Lanao del Norte province.

There are an estimated 400 pairs of the endangered birds in the wild and are faced with threats of deforestation and hunting. Salvador said that 90 percent of Philippine Eagles that they release in the wild are being shot.

“Shooting is probably the biggest threat to young Philippine Eagles in the wild now. Young birds, which are one to six years old, are very inquisitive and are not often frightened by people. So that is when they become really vulnerable,” he said.

In 2013, a male Philippine Eagle named “Minalwang” was also shot dead two months after he was released in the wild following two years of rehabilitation.

The Philippine Eagle has a wingspan spreading up to seven feet, making it one of the largest eagles in the world. It is considered by the International Union for the Conservation of Nature as a “critically-endangered species.”

Persons found guilty of killing critically endangered species like the Philippine Eagle will face jail sentences of up to 12 years and fines of up to P1 million as provided in Republic Act 9147 or the Wildlife Resources Conservation and Protection Act. Aries Joseph Hegina with a report from Joselle Badilla, Inquirer Mindanao/IDL