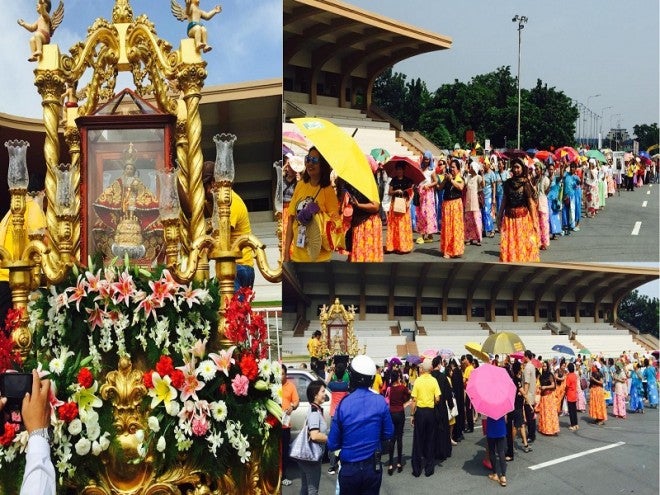 The Sto. Niño de Cebu at the Quirino Grandstand. PHOTO BY RUEL PEREZ, RADYO INQUIRER 990AM

The image of Sto. Niño de Cebu, the country’s oldest Catholic relic, arrived in Manila on Friday morning for a fluvial procession scheduled on Sunday, August 16.

According to a report by Radyo Inquirer 990AM, the historic image of the Child Jesus arrived at the Ninoy Aquino International Airport at around 8 a.m. and was brought to Quirino Grandstand, where it was welcomed by devotees.

The Sto. Niño de Cebu is being prepared for a fluvial procession on Pasig River this Sunday, in connection with the 450th anniversary of the finding of the image in the Queen City of the South, which Cebuanos call “Kaplag.”

A Mass will be held at the Manila Cathedral before the procession. The image will then be brought to the Intramuros ferry terminal, which is the starting point of the procession, where it will be sailed all the way to Guadalupe Viejo in Makati City.

Only ferries of the Metropolitan Manila Development Authority are authorized to join the procession until it reaches Malacañang. Private boats will be allowed to participate after the procession passes through the Palace.

Upon reaching Guadalupe, the image will be brought to the Nuestra Señora de Gracia Parish Church in Makati where another Mass will be held. It will also be transferred to the Sto. Niño de Cebu Parish in Biñan, Laguna.

The image will be brought back to Cebu on Tuesday. Yuji Gonzales with a report by Ruel Perez, Radyo Inquirer 990AM