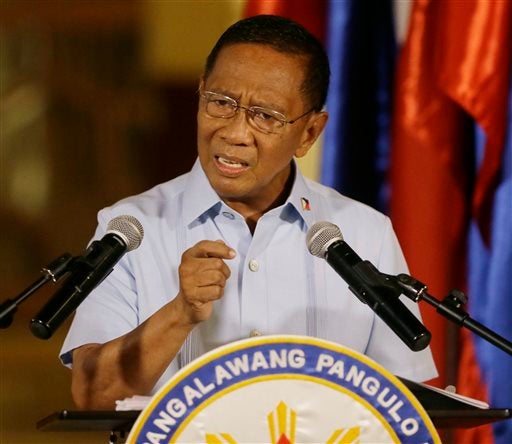 The camp of Vice President Jejomar Binay was no longer surprised that the Makati Business Club rated his office as the worst-performing government agency, noting how some of its members are favoring Interior Secretary Manuel “Mar” Roxas.

Both Binay and Roxas have publicly declared their presidential bids in 2016.

“With all due respect, 67 wealthy businessmen in Makati cannot represent the sentiment of our people nationwide. They cannot be expected to give a true and objective assessment of the performance of all government agencies, most especially the OVP (Office of the Vice President),” Joey Salgado, head of the OVP’s media affairs, said in a statement on Friday.

“We know for a fact that there are MBC members with long-held biases against the Vice President and his family. Then there are MBC officials like its executive director who were present at the anointment of Secretary Mar Roxas as Pnoy’s (President Benigno Aquino III’s) chosen one,” he said.

Salgado said the MBC members have also “profited from this administration’s economic policy that embraces the rich and excludes the poor” and that they want to continue “the inequality under an administration that is pro-business.”

Binay’s office ranked last among the 64 government agencies surveyed by the MBC with -76.3.

The other worst-performing agencies were the Department of Transportation and Communications, which ranked 63rd with a net satisfaction rating of -61.9; Bureau of Customs, 62nd (-55.6); Department of Agriculture, 63rd (-46.7), and the Energy Regulatory Commission, 60th (-42.4).

But Salgado questioned the basis used by the MBC when it assessed the performance of the government agencies.

“The Department of Budget and Management (DBM) fared better than the OVP when businessmen and economists have openly complained about the anemic spending that has a put a drag on the economy,” he said. 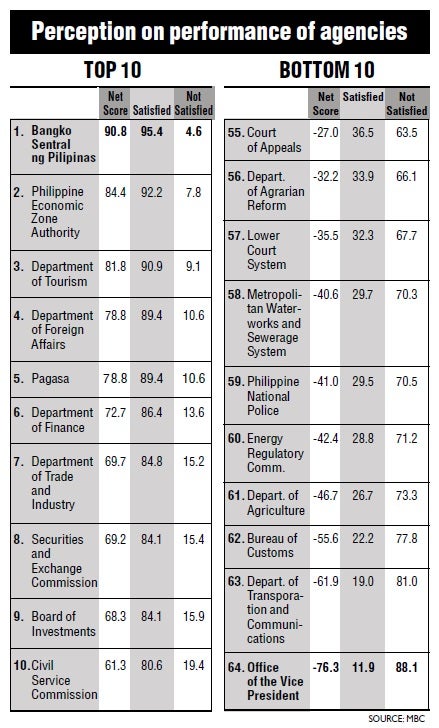 “They even placed the Department of Transportation and Communications (DOTC) a notch higher than the OVP, when the universal verdict is that the DOTC, first held by Roxas and now under his partymate Emilio Abaya, is the showcase of ineptitude, incompetence and a threat to public safety, not to mention a cash cow for LP (Liberal Party) allies,” he said.

Salagado said that apparently, the MBC members were “predisposed to believe every lie and gossip against the Vice President.”

“Yet they would ignore the fact that the DOTC would award a P535.5-million contract to a two-month-old company owned by an LP man, despite a measly capital of P625,000,” he pointed out.

While they were not expecting a recognition from the MBC, Salagado said these wealthy businessmen also have no right to judge the OVP.

He noted that the OVP has the lowest budget allocation among government agencies but despite its limitation, it has provided assistance to thousands of indigents who could not afford the cost of medical care “that is readily accessible to MBC members. “

“And while we do welcome an honest appraisal of our work, for the OVP, we are satisfied more by the simple gestures of thanks from those whom we have served: a letter of thanks from an OFW awaiting repatriation, a warm embrace and the words “maraming salamat” from a grateful mother. Doon lang, bawi na ang pagpupuyat at pagod (Those gestures are enough to offset our sleepless nights and exhaustion),” he further said. IDL