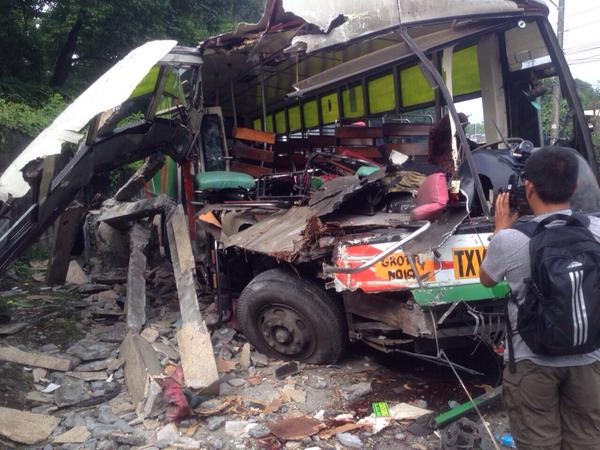 A Valisno Express passenger bus crashed into the marker at the boundary of Quezon City and Caloocan City in the morning of August 12, 2015. Two died on the spot while two others succumbed to their injuries in the hospital. ERWIN AGUILON/RADYO INQUIRER 990 AM

The death toll in an accident involving a bus in Quezon City rose to four and left at least 30 passengers hurt.

A San Jose del Monte City-bound Valisno Express bus with plate number TXV 715 crashed into the arch marking the boundary of Quezon City and Caloocan City at 7:20 a.m., Wednesday, and nearly sliced the vehicle in half.

According to a Radyo Inquirer report, two persons died on the spot after they were hit by debris from the arch. Meanwhile, two other persons died while being treated at Dr. Jose N. Rodriguez Memorial Hospital in Tala, Caloocan City.

At least 30 passengers were reportedly injured and were rushed to DJNRMH, Commonwealth Hospital, and East Avenue Medical Center for treatment.

SPO1 Ferdinand Paglinawan earlier told Radyo Inquirer that one of those who died on the spot, was a certain Eduardo Remorin Agabug, 39, of Tala, Caloocan City.

The driver of the bus, who was identified by authorities as George Pacis, fled the scene while its conductor, Ferdinand Dacusan, was also brought to the DJNRMH.

Investigation on the accident is ongoing. AJH/with a report from Erwin Aguilon, Radyo Inquirer 990 AM/IDL

Collision causes bus to roll over, flatten sedan on Edsa