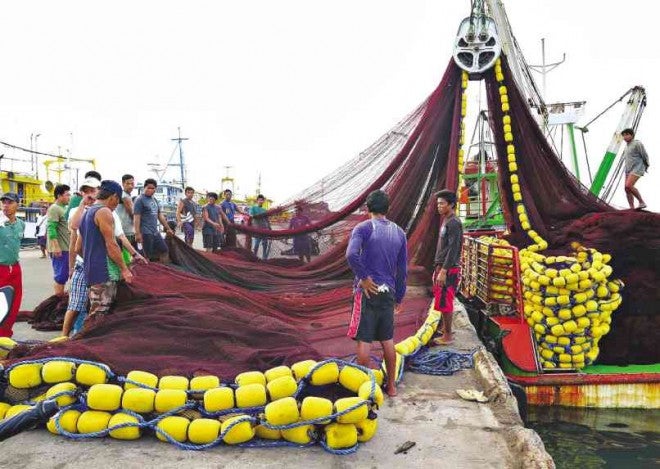 LUCENA CITY—Commercial fishing operators and fish traders warned of a nationwide protest against the implementation of the amended Philippine Fisheries Code, the controversial Republic Act No. 10654, which prevents, deters and eliminates illegal, unreported and unregulated (IUU) fishing.

Dr. Mario Pascual, a fish trader based in Navotas City, said his group and other medium-scale commercial fishing operators had been campaigning across the country against the punitive provisions of the law.

The amended Fisheries Code sets penalties from P1 million to as high as P45 million for commercial fishing violators.

Pascual said the campaign tours had validated their position that there was no public consultation on the creation of RA 10654.

“Many fishers, commercial and municipal, were ignorant of RA 10654, particularly its very high penalties,” Pascual told the Inquirer during a meeting on Aug. 7 here with close to 100 commercial fishers from Marinduque province and parts of Quezon province.

Asis Perez, director of the Bureau of Fisheries and Aquatic Resources (BFAR), maintained that there was nothing new in RA 10654, except for the graduated penalties for violators.

“The only difference is the increased penalty for violators. So, there should be no cause for alarm for all law-abiding fishers,” Perez said in a phone interview on Tuesday.

“We will only be implementing the law passed by Congress because it is our duty,” he said, maintaining that the BFAR is a law-enforcement agency of the government.

Out of more than 1.6 million registered fishers across the country, at least 1.2 million are small fishermen or municipal fishers, Perez said, citing the BFAR’s latest data.

“We are just protecting the interest of the majority by securing that their reserved fishing grounds will not be intruded by unauthorized and illegal fishers,” he said.

Pascual claimed that the whole fishing industry, even small fishers, would be affected by the restrictive provisions of RA 10654.

Stressing that the law is not at all different from RA 8550, or the Fisheries Code of 1998, Perez said “commercial fishers are still prohibited to fish in municipal waters 15 kilometers from the shoreline because that area is reserved for small and marginalized fishers.”

Pascual said the date of the nationwide protest was still being discussed, but it could be before the full implementation of the law next month. The law’s implementing rules and regulations (IRR) are still being completed.

Luzon-based fishers will troop to Manila and demonstrate against RA 10654, while similar protests will be held in the Visayas and Mindanao. “We will vigorously condemn the restrictive and inhumane rules to be implemented by the government in September,” Pascual said.