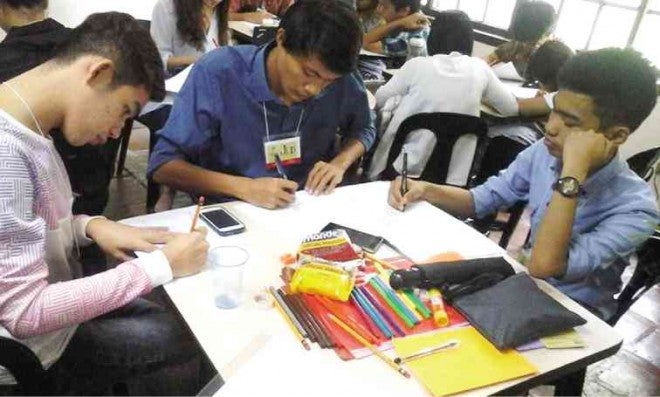 The University of the Philippines (UP) Geodetic Engineering graduating student is one of 35 disadvantaged students from different universities and colleges supported by Sinag Microfunds through interest-free loans.

Although Sinag failed to win the $25,000 grant money, it decided to push through with the project to empower Sinag beneficiaries and equip them with lifetime skills.

Every lecture during the workshop was infused with the “social good” theme to encourage students to pay it forward when able because Sinag, which was founded by seven UP alumni, “is all about giving back,” Jamora said.

Lopez said that apart from enabling him to learn the basics of graphic design, design thinking, financial management and social entrepreneurship, the seminar also challenged him to think of ways to serve his countrymen.

“The need to do something for the country after graduating is instilled in UP students,” he said. “Sinag students, although not all are from UP, share the same values.”

Lopez, who dreams of solving the country’s transportation problems, said he was inspired by the design thinking presentation of Habi Education Lab founder Gerson Abesamis, who has a Master’s in Education degree from Harvard University.

The 23-year-old Lopez, the son of a retired government employee and state university professor in Mindanao, said the “commute map” website or application that he wants to design is similar to Google maps.

But his interactive map would not only give directions but would also show the user the fastest and cheapest way to travel to different parts of the country, he said.

With glitches in the Light Rail Transit (LRT) and Metro Rail Transit (MRT) cropping up quite often, the app could inform users of other ways to get to a place—like which jeepney to take or if tricycle would be a smarter choice, Lopez explained.

“The commute map can also help ease traffic congestion because it will encourage private car owners to use public transportation,” he said.

For third-year Broadcast Communication student Carlo Robedillo, knowing the audience and keeping them in mind when creating a design were his biggest takeaway from the workshop.

“The workshop was good because it enriched my knowledge and reiterated the need to have a purpose,” Robedillo said. 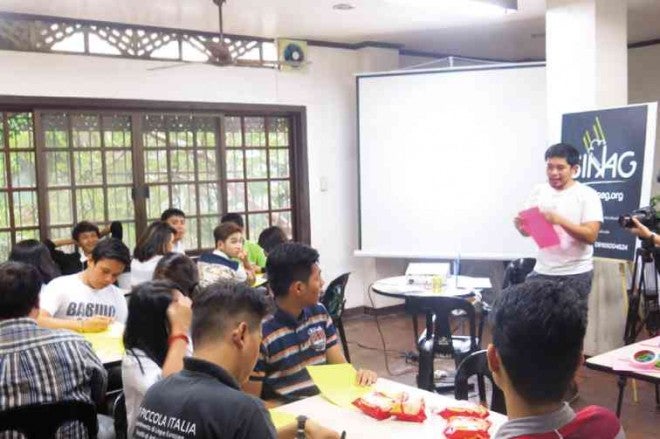 He joined Sinag after he transferred from UP Tacloban to UP Diliman following the devastation wrought by Supertyphoon “Yolanda” in his hometown Tolosa, Leyte province.

Robedillo, who is taking the Advertising track, believes the skills he gained from the workshop will help him in the future when he starts job-hunting.

Jamora said Sinag’s main thrust was education because it was the only way to level the playing field. But they also wanted their students to have an “edge” when they started applying for jobs.

“There’s a difference in social capital between a student coming from a background of poverty and those from families who can afford,” Jamora said.

Well-off graduates might be endorsed to a “tito” who owned a company and would have the time and resources to acquire the skills that employers were looking for, she said.

Most of the students they were helping did not even have computers to access “how-to” videos online, she said. “How will they learn?”

To address the gap, Sinag invited experts to discuss the four topics chosen by students through a brainstorming activity in February.

Apart from Abesamis, the other speakers were World Bank communications consultant Rikki Lee Mendiola, who discussed graphic design; Maida Salcedo of the Ateneo School of Business and UN Children’s Fund, who talked about social entrepreneurship; and UP Master’s in Business Administration professor Lawrence Velasco, who shared his knowledge in financial literacy.

Only the basics were tackled because of time constraints, Jamora said, but “hopefully, we can have a week-long training next year; one topic per day so the students will be able to absorb the knowledge.”

Sinag started lending money to five UP Diliman students in 2013. After a year and a half, the organization has reached students from other schools, including UP Los Baños, New Era University, Asian College of Technology and Lyceum of the Philippines.