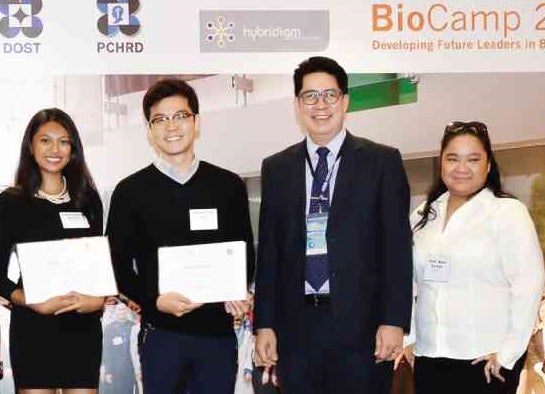 WINNERS Navarro and Qui with Montoya and Arroyo

For being curious and concerned, as well as for trying to find a cure for cancer, Martin Daniel Qui and Kamila Isabelle Navarro bested four other finalists in the recent local Biotechnology Leadership Camp (BioCamp).

His study was about the “Direct regulation of the MEG3 long noncoding RNA tumor suppressor by microRNA and MirSNPs.”

“Cancer research has always been my passion and I’d like to find newer angles of approaching the disease, as well as to find new therapies,” said Qui, who also won first place during the annual convention of the Philippine Society of Biochemistry and Molecular Biology’s Youth Science Forum.

Since he was a child, Qui had always wanted to be a doctor. He was a thesis student at the Disease Molecular Biology and Epigenetics Laboratory.

She also focused on cancer because her grandmother suffered from the disease. “I hope that through my study, I was able to give some insight into possible treatments for the disease,” Navarro said.

A former intern at the Philippine Nuclear Research Institute, her research was short-listed in UP for Best Thesis. She won second place in Best Poster Presentation during the 5th Annual Conference of the Philippine Society of Cell Biology.

The finalists were evaluated based on their academic excellence and research, professional experience and extracurricular activities.

A total of 82 aspiring young scientists participated in the annual BioCamp, which brings together young and promising graduate and postgraduate students in natural sciences and business administration in the country.

“Our goal is to develop globally competitive Filipino scientists who will help improve health outcomes and the quality of healthcare in the country,” said Nikolaos Tripodis, president and managing director of Novartis Healthcare Philippines.

The camp aims to give scientists and researchers the knowledge to help them find solutions to the problems of the country, said Christine Fajardo, Novartis Philippines corporate affairs head.

First held in 2006, the local BioCamp has so far sent 18 delegates to Switzerland. This year’s theme, “Innovating for Global Competitiveness,” is  a variation on “Philippines: A Science Nation Innovating for Global Competitiveness” theme during the National Science and Technology week of the  Department of Science and Technology (DOST). 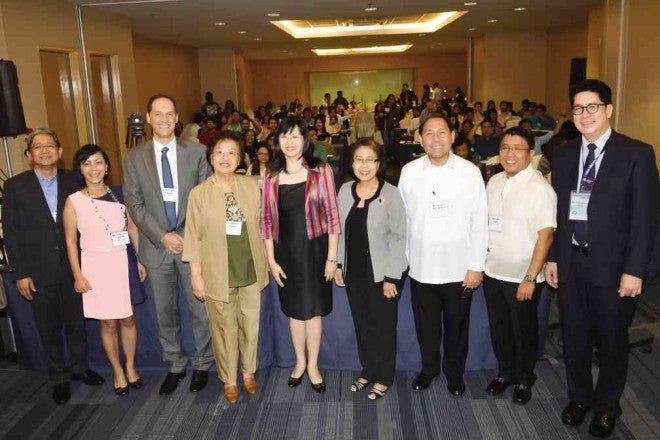 Qui and Navarro will join 58 delegates from other countries at the international BioCamp on Aug. 23-26 at the Novartis international headquarters in Basel, Switzerland.

The delegates will hear Novartis’ top scientists discuss biotechnology and trends in medicine and life science; the  development of a biotechnology product, how to start a biotech company, and developing and launching a pharmaceutical product.

They will also  visit the Novartis laboratories and facilities, as well as learn about career opportunities and have career consultations with Novartis officials.

“Our cultural diversity … will present so many different takes on biotechnology. I will go with an open mind and take [away] as much as I can,” said Qui.

Navarro  said she expected to learn a lot from scientists from other countries, as each would have a different background and outlook in life. “It’s important to have that kind of variety because each member can then contribute something unique—generating a truly innovative idea … .”

At the local BioCamp, Maoi Arroyo, founder and chief executive officer of Hybridigm Consulting,  discussed the importance of having a team to achieve innovation.

Navarro defined innovation as “generating an idea other people initially perceived as crazy” but eventually embraced.

As for Arroyo’s mention of “Filipinnovation,” Navarro said  this was “Filipinos generating ideas inspired by our local culture that would enhance the quality of life in the Philippines.”

Arroyo, who talked on “Forging a Team for Disruptive Healthcare Innovation,” said commercialization of an idea was vital for social impact. “Having an invention and having it published are not enough,” said Arroyo.

Qui said scientists had to collaborate with businessmen and companies to bring science to communities. “Research is extremely expensive and is often high-risk, requiring years (for return of investment),” he said.

Novartis partnered with the DOST and the Philippine Council for Health Research and Development (PCHRD) for BioCamp, which stresses the importance of human resource in innovation.