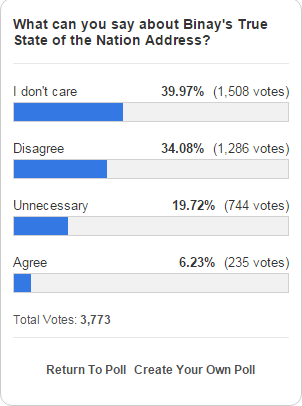 Seven out of 10 online readers said that they did not care about or disagree with the contents of Vice President Jejomar Binay’s “true” State of the Nation Address on Monday.

In a poll posted by INQUIRER.net, 1,508 readers or 39.97 percent said that they did not pay attention to the vice president’s speech.

Meanwhile, 1,286 readers or 34.08 percent said that they disagree with Binay’s counter-Sona.

Others also thought that Binay should not have given the counter-Sona, as 744 readers or 19.72 percent said the speech was already unnecessary.

Only 235 readers or 6.23 percent of the total votes sided with Binay as they agreed with his counter-Sona.

A total of 3,773 respondents answered the question: “What can you say about Binay’s True State of the Nation Address?”

In his counter-Sona, Binay lashed out anew against President Benigno Aquino III’s “bumbling and insensitive” government due to its supposed failure to provide employment and social services to Filipinos and its mishandling of 2010 Quirino hostage-taking crisis, the aftermath of Super Typhoon Yolanda, the botched Mamasapano operation, the partly unconstitutional Disbursement Acceleration Program, and the state of the overburdened Metro Rail Transit 3.

He even gave a tribute to the 44 Special Action Force troopers killed in “Operation Exodus.”

However, Binay was mum on the corruption allegations hurled against him.