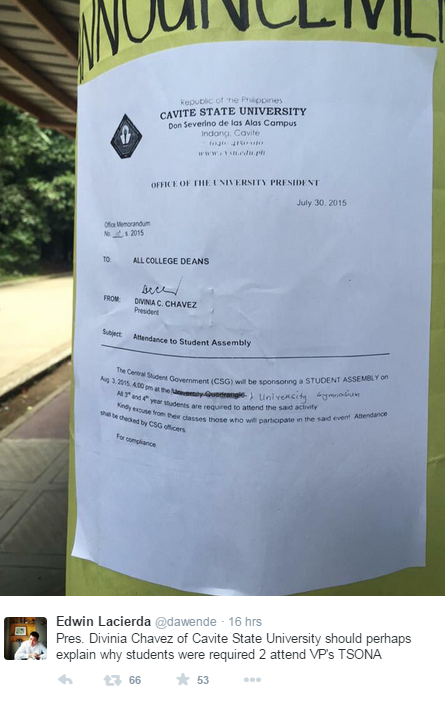 In his social media pages, Lacierda posted a photo of the alleged memo from CSU President Divina C. Chavez addressed to college deans requiring students to attend a “student assembly” at the university gymnasium.

“The Central Student Government (CSG) will be sponsoring a STUDENT ASSEMBLY on Aug. 3, 2015, 4:00 pm at the University Gymnasium. All 3rd and 4th year students are required to attend the said activity,” the alleged memo dated July 30 read. “Kindly excuse from their classes those who will participate in the said event. Attendance shall be checked by CSG officers. For compliance.”

In his Twitter account, Lacierda said Chavez should explain why students were required to attend the Binay event.

In a separate Facebook post, Lacierda reacted to a statement by Binay spokesperson Joey Salgado, who claimed that the Vice President was invited by the university to speak to the student assembly.

“Oh you mean it was such a huge honor for Cavite State University to invite Vice President Binay that the memo failed to mention him as the Honored Guest Speaker and instead just called it a ‘Student Assembly’?” Lacierda said.

In his counter-Sona, the Vice President on Monday hit the Aquino administration anew for its supposedly bumbling and insensitive handling of issues such as the 2010 Quirino hostage-taking crisis, the aftermath of Super Typhoon Yolanda, the botched Mamasapano operation, the Disbursement Acceleration Program, the Bangsamoro Basic Law, and the sorry state of the Metro Rail Transit, among others.

The Vice President, however, kept mum on the corruption allegations hurled against him.