President Aquino on Tuesday surprised a largely Liberal Party (LP) gathering in a show of support for Interior Secretary Mar Roxas, his anointed standard-bearer in the presidential elections next year.

Aquino’s attendance at the meeting of the Union of Local Authorities of the Philippines (Ulap) was a last-minute decision, even if he was invited.

Even LP stalwarts like Albay Gov. Joey Salceda was surprised when the President showed up. Malacañang did not announce the President was coming.

Without mentioning Roxas in his seven-minute impromptu speech, the President said that there were those who might be waiting for the next survey or even those who could be tempted not to support someone who might not be guaranteed to win.

“But I said I have to be at this event because (this shows) that this early, we are already making a stand on where we will be headed,” the President said to applause from the 1,500-strong Ulap crowd that packed the Gloria Maris restaurant at Greenhills in San Juan City.

Acknowledging party members, he joked that some of them were having thinner hair than him. He also seemingly launched the senatorial bid of Justice Secretary Leila de Lima, who was in the audience, when he asked how “I Love Leila” as a campaign slogan sounded.

“A lot of you were with me when I was stepping up (to the presidency) and next year, I will be stepping down. Never in my life did I think that I would retire at 56. But if you are the ones I am with, you who joined me in treading the straight path for so long no matter how difficult it was, my conscience is clear when I think that I could retire and just act as a great assistant to all of you,” Aquino said in Filipino.

He emphasized that his administration had already built the foundations for a better nation.

The President said it was “difficult to sell an abstract idea.” Taking a swipe at his critics, especially those eyeing the presidency, Aquino said these people had been promising that if elected, they could improve the people’s lives.

“Until now, I am waiting for them to say how. It’s very easy to make promises,” the President said. “But us, we are telling the people how their lives would be better.”

Oriental Mindoro Gov. Alfonso Umali Jr., Ulap president, said the event was attended not only by LP members, but also by stalwarts of other political parties like the Nacionalista Party (NP), National Unity Party (NUP) and Nationalist People’s Coalition.

“This is the bandwagon effect. This is it,” said Umali, the LP national treasurer. “This is ‘all for one, one for all.’ We only expected about 1,000 people. But the leaders here were more than double of what we were expecting to attend.” 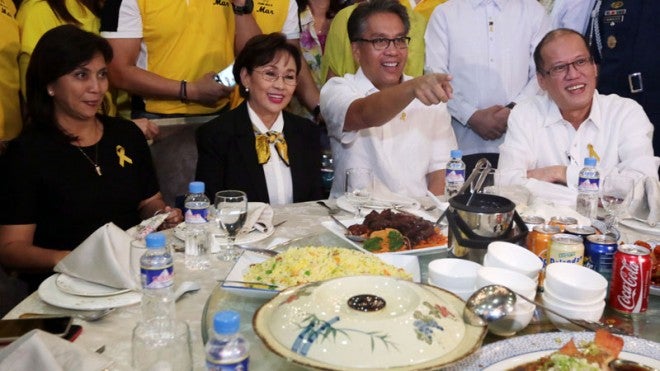 Umali said the leagues of governors, mayors, vice mayors and other groups of local officials would also hold similar events in the coming days to show their support for Roxas.

The President said that come campaign season, the administration could show proof of what it had done compared to promises still being made by others.

The President said everyone was free to take their pick to exemplify how life had improved for the Filipinos, even as he admitted that there was still much to be done.

For example, he said, while there had been a 27-percent year-on-year increase in car sales, the infrastructure still had to be improved.

But infrastructure, at least what had been built during his term, the President proudly listed as among his administration’s achievements.

“Look at the infrastructure. Look at the CCT (conditional cash transfer program). Look at PhilHealth. Look at the improving educational system. Look at the number of Filipino overseas workers who have returned home and found jobs. Look around you and take your pick. Even our foreign affairs and defense posture have improved,” Aquino said.

The President said none of these were done through “magic in the past years, going on six.”

Salceda told the Inquirer that the administration coalition planned a “slow burn” campaign for Roxas leading to victory in the May 2016 elections. “We will do a slow burn rather than a big bang,” Salceda

Just like the President and Roxas, Salceda acknowledged that Roxas’ poor survey ratings were a big challenge.

Salceda said one campaign strategy being planned was the “microtargeting” of voters, similar to that employed by US President Barack Obama when he ran for reelection in 2012.

“This is a concrete evidence of the power of presidential endorsement. (Almost) all political parties are here,” said Eastern Samar Rep. Ben Evardone.

Isabela Rep. Ana Cristina Go, an NP member who belongs to the minority in the House of Representatives, said her support for Roxas was “a support for the President’s choice” of the country’s next leader.

Bulacan Gov. Wilhelmino Sy-Alvarado of NUP said he and other local officials in his province who belonged to other parties had decided to coalesce and cross party lines to throw their support for Roxas.

He said Executive Secretary Paquito Ochoa Jr., who belongs to the so-called Samar faction in the Aquino administration, had told them to support whoever the President would endorse.

“Secretary Roxas has never been involved in any corruption issue despite holding several government positions. Until now, he has maintained his clean image. That’s very important,” Alvarado said.–With a report from Marlon Ramos