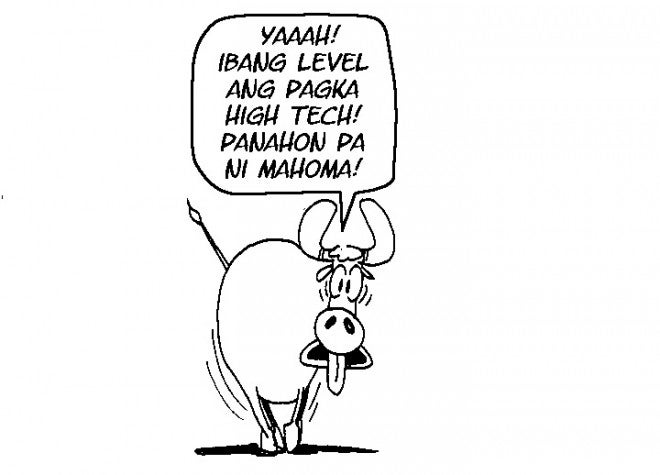 At least it’s not Betamax.

Lawmakers on Tuesday learned that most security cameras at the House of Representatives were still running on antiquated VHS (video home system) technology, which can record, at most, five days of surveillance feed before it is taped over.

Using such outdated technology meant that footage needed to prove allegations of bribery regarding the Wang Bo case was “no longer available due to the self-limiting capacity” of the system, or so explained Samuel Pandagani, chief of the technical security unit of the Legislative Security Bureau.

Pandagani and other members of the House security led by Sergeant at Arms Nicasio Radovan Jr. appeared at the final hearing of the committee investigating the bribery claims at the Bureau of Immigration involving Wang.

According to a newspaper (not the Inquirer), the detained Chinese paid off immigration officials for his release and stop his deportation to China, where he is facing illegal gambling and embezzlement charges.

The newspaper report also alleged that bribe money was delivered to some congressmen between May 25 and 27 in the Speaker’s office at the House of Representatives complex in Quezon City in exchange for the lawmakers’ support for the Bangsamoro Basic Law (BBL).

The money, the report added, was also meant to bankroll the campaigns of Liberal Party (LP) candidates in 2016.

The claims prompted the investigation panel chaired by Pampanga Rep. Oscar Rodriguez to invite the House security personnel to explain why they could not produce closed circuit television (CCTV) footage of the time and date when the supposed bribe was delivered.

The CCTV footage for those dates was “no longer available due to the self-limiting capacity” of the system,” Pandagani told the panel. “The (VHS) recording has an automatic override system that deletes old footage,” he added.

Pandagani said the security camera at the rear entrance of the main building was one of 41 cameras connected to the old system installed in 2005 using VHS to record the feed.

The VHS replaced the Betamax recording system that uses magnetic tape which, while producing better image quality, is also more prone to deterioration, thus shortening the life of the cassette.

Betamax cassettes, which became obsolete in the early 1990s, also have less capacity in terms of recording time than VHS cassettes.

Of the 41 cameras in the House, only 33 are still working. In 2008, an additional 32 security cameras were installed, this time using the more sophisticated DVR (or digital video recorder) technology. Unlike VHS, the DVR system uses a hard drive instead of video tapes and makes for a more permanent and extensive recording of better quality or higher resolution.

In 2010, as part of a P53 million upgrade, 269 cameras were installed at the House. However, “only 13 cameras are still working because the servers malfunctioned,” Pandagani said.

Radovan said he had recommended a totally new system involving 300 new cameras for the entire House complex. “The bids and awards committee had convened once regarding this request, and I’m quite confident this will be approved,” he said.

The antiquated VHS recording at the House prompted Alliance of Volunteer Educators Rep. Eulogio Magsaysay to remark in disbelief: “VHS technology? That still exists? Doesn’t that date back to the 1990s?

Magsaysay said it was an embarrassment that the House security would be so “technologically backward.”

As one of the country’s vital installations, it was important that the House upgrade its security system, Pangasinan Rep. Leopoldo Bataoil said.

But 1-BAP (Barangay Ating Paunlarin) Rep. Silvestre Bello III moved to stop further discussion of the security system in Congress, as it would be “exposing the security deficiencies of the House.”

“[We don’t want] the entire nation [to] find out that we’re not secure, [that] we don’t have enough security,” he said, adding that the matter should be discussed in executive session.

Justice Secretary Leila de Lima, who could not make it to the hearing, sent a letter to the committee about the results of the National Bureau of Investigation probe into the payoff allegations.

“The team did not find any direct or indirect pieces of evidence pointing to payoffs between the party of Wang Bo and any official/employee of the Bureau of Immigration,” she said.

Neither did the NBI find any evidence substantiating the reports of bribes to House members in return for a favorable vote on the BBL, or as monetary contributions to the LP, De Lima added.