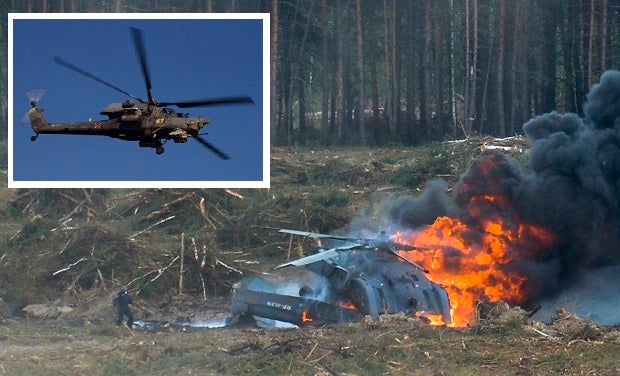 A Russian military helicopter burns after crashing during an aerobatic display in Dubrovichi, Russia, Sunday, August 2, 2015 , killing one of its crew members and injuring another. The Mi-28 helicopter gunship (inset) was part of a flight of helicopters performing aerobatics at the Dubrovichi firing range in Ryazan region, about 170 kilometers (105 miles) southeast of Moscow, when it crashed Sunday. AP

MOSCOW, Russia — A Russian military helicopter from an elite aerobatic squadron crashed Sunday during an air show, killing one pilot and injuring another, the Defense Ministry said, the latest in a series of accidents that have dogged the nation’s air force this year.

The Mi-28 helicopter gunship was part of a flight of helicopters from the Berkut aerobatics team performing stunts at the Dubrovichi firing range in Ryazan region, about 170 kilometers (105 miles) southeast of Moscow, when it went down. The Defense Ministry said the second pilot who survived the crash was in satisfactory condition.

There was no damage on the ground, and the Defense Ministry emphasized that the flights were conducted at a safe distance from the crowd and there was no danger for those who watched the air show.

The footage broadcast by Russian television showed four gunships performing stunts and firing flares. One helicopter is then seen spinning down fast, hitting the ground and then exploding. The first pilot, Lt.-Col. Igor Butenko, was killed.

“There are situations when it’s impossible to survive no matter how well-trained the pilot is,” Butenko’s son, an air force academy cadet, told Russia’s Lifenews online portal.

The surviving pilot said the crash was caused by the failure of the helicopter’s hydraulic system.

The Mi-28 is a two-seat attack helicopter replacing older Soviet-built gunships in the Russian inventory. It has been sold to Iraq and Kenya, among others countries.

Sunday’s show was part of the International Army Games, competitions involving troops from Russia and several other nations at shooting ranges across Russia that began Saturday.

The games are part of Kremlin efforts to show off Russia’s resurgent military might amid tensions with the West over Ukraine.

However, a series of military crashes in recent months has raised questions about safety standards. Sunday’s accident was the seventh military crash this summer.

Last month, a Tu-95 strategic bomber went down when all its four engines cut off, killing two of its seven crewmen, and a Su-24 bomber crashed on takeoff, killing both pilots. In June, another Tu-95 ran off the runway during landing, killing one crewmember.

During the summer, two MiG-29 fighter jets crashed in unrelated accidents and a Su-34 bomber ran off the runway. There were no fatalities in those crashes.

Some experts said the crashes could have been rooted in the shortage of qualified ground support personnel following a military reform that has seen sharp personnel cuts.