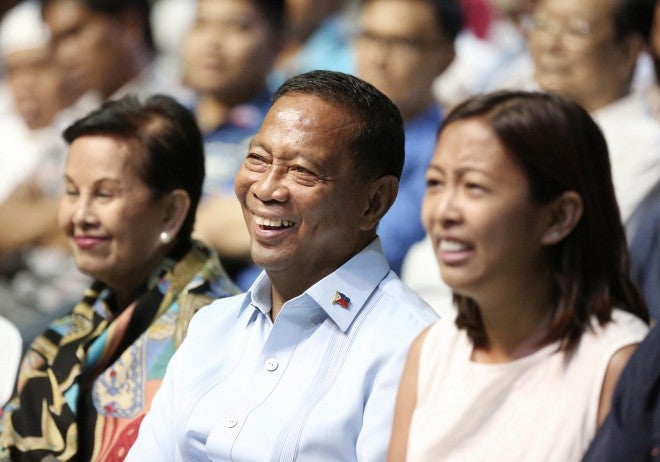 Vice President Jejomar Binay with his wife Elenita Binay and Rep. Abby Binay leads the official launch of the United Nationalist Alliance (UNA), touted to be the main opposition party in the 2016 elections, at the Makati Coliseum.  INQUIRER/ MARIANNE BERMUDEZ

LOS BAÑOS, Laguna – The United Nationalist Alliance (UNA) is banking on the support of the local officials of Cavite province to help boost the ratings of Vice President Jejomar Binay in the 2016 presidential race.
“We, from UNA, are optimistic with the leadership and popularity of (Cavite) Governor Jonvic Remulla and other local officials and the Magdalo group who joined the party…It will definitely result in a big leap in (Binay’s) ratings,” said UNA spokesperson Mon Ilagan in a text message to the Inquirer on Sunday.
Binay, who has gone around the province several times since last year, is set to deliver his own State of the Nation Address (Sona) on Monday afternoon at the Cavite State University in Indang, Cavite, at 4 p.m., according to an emailed advisory from the Office of the Vice President.

“It’s purely the true state of the nation. (And) one thing’s sure: (Binay) will be statesman like in his speech,” Ilagan said.

Binay was also in Cavite twice last week for the merger of UNA and the Partido Magdalo, a local political party headed by Governor Remulla, was also Binay’s former spokesperson.
Elected officials and Magdalo members threw their support behind Binay’s presidential bid by signing the covenant of unity Thursday evening, according to an emailed statement from UNA.
Ilagan however did not say why Binay chose Cavite as the venue for his counter-Sona, to be held a week after President Benigno Aquino III delivered his final Sona and days after the Liberal Party announced that Mar Roxas would be its standard bearer.
Binay was earlier unperturbed by having to run against Roxas for the presidency, noting that he defeated the latter in the 2010 vice presidential race.

Ilagan said that Binay or UNA would not as yet make any announcement regarding its 2016 line up of candidates.#