They used to live like kings, their air-conditioned rooms equipped with top-of-the-line entertainment systems, Jacuzzis, stripper bars, recreational drugs, concert equipment, sex toys, wads of cash and underlings at their beck and call.

But at dawn on Saturday, 17 high-profile drug convicts found themselves where they really belonged: in 8-square-meter jail cells inside a recently inaugurated building at the New Bilibid Prison (NBP) in Muntinlupa. This time, their cells had only the basic necessities: a closed-circuit television (CCTV) camera for added security, bunk beds, a sink, a basin and a dipper (“tabo”).

“It’s a new environment. This is a real prison quite different from their former kubol (villas). Now they’d be in actual cells, unlike before when they were in a community,” the official added.

In a raid led by Justice Secretary Leila de Lima in December last year, the high-living drug lords were found living in luxury and plying their illegal trade behind bars, apparently with the complicity of jail guards and prison officials.

Their new cells at the recently inaugurated Building 14, a facility within the Maximum Security Compound of NBP, are markedly different from their old quarters. Inside Building 14, the drug convicts are isolated from the main prison population through a separate entry and exit, part of stricter security measures.

At 4:19 Saturday morning, De Lima led the highly secured convoy from the National Bureau of Investigation (NBI) headquarters in Manila to the NBP. The inmates were transported on a BuCor coaster flanked by vehicles carrying heavily armed NBI agents, BuCor officials and Special Weapons and Tactics (SWAT) agents.

The convicts were herded to their new digs at 5 a.m. and immediately locked up. Based on a carefully planned placement scheme, officials said some cells would be occupied by one inmate, others by two.

The inmates, known to still wield influence even in prison because of their drug-sourced wealth, did not know they were going to be transferred to the NBP at dawn on Saturday, but they did not resist, De Lima said. “We know they were [expecting] this,” she added.

“[But] we cannot underestimate the capacity of these drug inmates. We heard that while they wanted to be transported back to Bilibid, they did not want to be moved here to Building 14,” De Lima told reporters who were given an advisory about the confidential operation late Friday night, but were not allowed to enter the building. 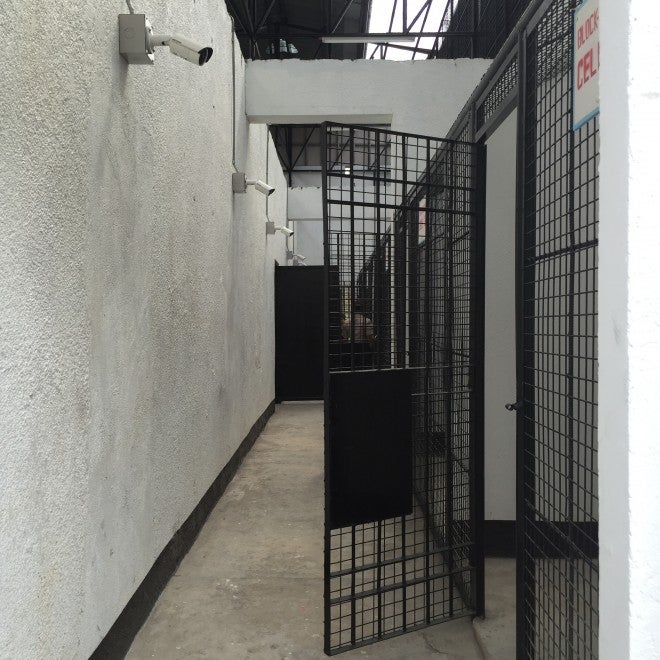 CCTV cameras are placed on the wall of a portion of Building 14, a former death chamber which was renovated to house high-risk inmates. TETCH TORRES-TUPAS/INQUIRER.net

“When George Sy (of the Bilibid 19) passed away recently due to cancer, he was replaced by Ruben Tiu, [so the Bilibid 19 are still 19],” Cruz said, adding that a sufficient number of BuCor personnel have been assigned to Building 14.

It has yet to be determined when two of the 19 inmates could be transferred to the NBP. One of them, German Agojo, is still confined at the Philippine General Hospital due to intestinal problems, according to Cruz, while the other, Clarence Dongail, has been placed under the Department of Justice (DOJ) Witness Protection Program.

“The inmates have the capacity to ask to be rescued by their cohorts while outside [the NBP],” said De Lima, explaining the urgent and confidential nature of the transfer operation.

“They wanted to go back to their old place [instead of the new building],” she added. “Although their kubol are no longer there, who knows? If we put them back there and they’re back under the the protection of their gangs, in time, they might be able to reestablish and again set up their kubol,” the justice chief said.

In the new building, the inmates will be “well-guarded,” De Lima said. “The whole purpose of this (transfer) is to disable them from [their drug trade]. That’s why we’re putting in stricter security measures.”

The DOJ head said that though visitations were allowed, the hours were limited, and only the immediate family—including “the legal wife or the certified common-law wife, not wives”—and the convicts’ counsel are allowed.

De Lima entered the prison briefly to check on the Building 14 operation center, where monitoring equipment is housed, but did not check on the new transferees.

BuCor doctors also performed a cursory medical checkup on the inmates and found nothing irregular.

De Lima said the BuCor was also consulting with other law enforcement and intelligence agencies, among them the Philippine Drug Enforcement Agency, the Presidential Anti-Organized Crime Task Force and the Intelligence Service of the Armed Forces, in finalizing the list of other inmates who should be moved to the 58-capacity Building 14.

“We are cleaning up the list of who else should be moved to this facility … . We just can’t move them today, but it will be very soon,” the justice chief said.

The short list included inmates who, like the group moved on Saturday, continued to deal drugs while in prison.

“[We are choosing] those who we think, based on intelligence or validated reports, are … still plying their [drug] trade inside confinement, and those who have the capacity to continue (plying) that trade,” De Lima said.

“The goal is to make the NBP a completely drug-free facility,” she added.

CCTV in every cell

Among the security measures put in place inside Building 14 are CCTV cameras installed in each of the cells, and assigning prison guards who are not prone to corruption, De Lima said.

“Those were my marching orders to Director General Cruz—that we assign the right guards and supervisor, those who are not vulnerable (to corruption),” the DOJ official said.

“These [convicts] will always try all sorts of means and methods to go around the system and sneak in contraband. That’s why we have to implement stricter security measures, given the kind of inmates that we have transferred here,” she added.

After the December raid, the inmates, tagged the “Bilibid 19,” were moved out of the NBP and held at the NBI quarters in Manila to isolate them from their gangs.

Some of the kubol at the NBP have been demolished, and more will be dismantled soon, Cruz said. With a report from Kristine Felisse Mangunay