The Department of Justice (DOJ) will consult various law enforcement agencies including the police and military to identify the high risk inmates  that will occupy the newly renovated Building 14 inside the Maximum Security Compound of the National Penitentiary.

Justice Secretary Leila de Lima said that aside from the National Bureau of Investigation (NBI), she will consult the Philippine Drug Enforcement Agency (PDEA), Philippine National Police (PNP), Intelligence Service of the Armed Forces of the Philippines (ISAFP) to identify the inmates who still has the capacity to run their “businesses” while inside prison.

“We are going to deliberate on [who will occupy Building 14]. We are getting inputs from relevant agencies like PDEA, ISAFP, PNP and NBI. Then, we will finalize the list,” de Lima told reporters.

Building 14 was renovated to house the high-risk inmates including the “Bilibid 19” currently at the National Bureau of Investigation.

The DOJ pushed for its immediate renovation after a Dec. 15, 2014 raid showed that high-risk inmates inside Bilibid have managed to sneak in posh appliances, gadgets, drugs, firearms, illegal drugs and cash of different denomination. 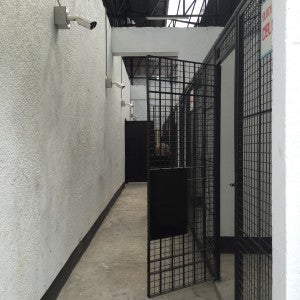 CCTV cameras are placed on the wall of a portion of Building 14, a former death chamber which was renovated to house high-risk inmates. TETCH TORRES-TUPAS/INQUIRER.net

The building is within the Maximum Security Compound but its gate is not accessible via the heavily guarded main entrance of the national penitentiary. Its gate is along the main road of the New Bilibid Prison leading to the Reception and Diagnostic Center and near the Bureau of Corrections (BuCor) Museum, formerly the lethal injection chamber.

It used to be a death chamber for convicts scheduled to die by electric chair. BuCor Chief Rainier Cruz III said a total of 84 inmates were executed in the building. The last execution took place Oct. 21, 1976.

Then, during the 80s, it was turned into a disciplinary area for high risk inmates.

After its renovation, a total of 29 cells measuring 8 square meters each will be occupied by 58 inmates. It is equipped with CCTV cameras, signal jammers and its own sets of guards.

De Lima said, they will concentrate first on drug inmates.

“We want them to be disabled completely from continuing their illegal acts,” de Lima said who inspected the facility.

Meanwhile, Fr. Robert Olaguer, BuCor Spokesperson said the target is to transfer the inmates into Building 14 by July 31 but it will depend upon the list that is being drawn by de Lima, Cruz and other law enforcement agencies.

Read Next
Moroccans convicted for drinking juice during Ramadan
EDITORS' PICK
House energy committee chair Arroyo bats for cheap electricity
Why Tagle is a leading papal contender
KWF has no power to ban, censor written works – Lagman
Powered by style, innovation and passion
A laptop that maximizes your WiFi so you can maximize your productivity
In Borongan, nuns play hoops (not mahjong)
MOST READ
Why Tagle is a leading papal contender
SRA officials should resign after ‘illegal sugar order’ – Zubiri
Arjo Atayde reveals proposal to Maine Mendoza was ‘more than a year’ in the making
Gilas gets solid core with Clarkson, Sotto planing in
Don't miss out on the latest news and information.