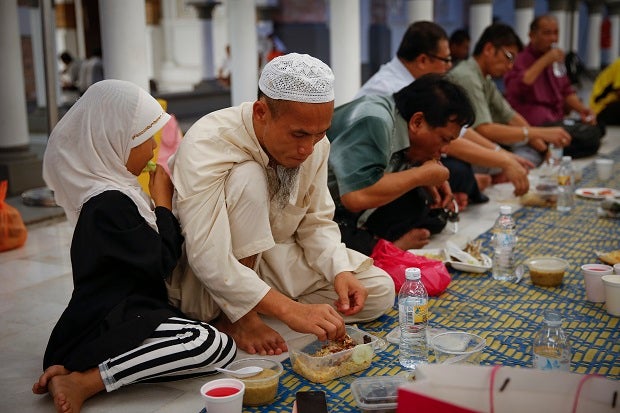 Malaysian Muslims break their fast during the Islamic holy month of Ramadan in Kuala Lumpur, Malaysia on June 18, 2015. In Morocco, four young people arrested for drinking fruit juice during the day were convicted of violating the fast and were each given four-month suspended jail sentences. AP

“This verdict is courageous even though we would have liked them to be cleared,” Omar Arbib, of the Moroccan Association for Human Rights, told AFP.

He was referring to the leniency of the sentence: under Moroccan law, the offence can carry a penalty of up to six months behind bars.

A fifth young person, under the age of 18, is due before a juvenile court on the same charge Friday.

Throughout Ramadan, which ends this week, believers are supposed to abstain from eating, drinking, smoking and having sex from dawn until sunset.

The five were arrested July 6 in Marrakesh, one of the kingdom’s main tourist destinations.

They had been taking a friend to the airport, but it “seems the heat pushed them to buy fruit juice from sellers in Jamaa El Fna Square, where they drank it in public”, Arbib said.

He said other juice sellers there had alerted the police.

Penal reform currently at the debate stage, if implemented, will retain jail terms for public breaking of the fast during Ramadan.