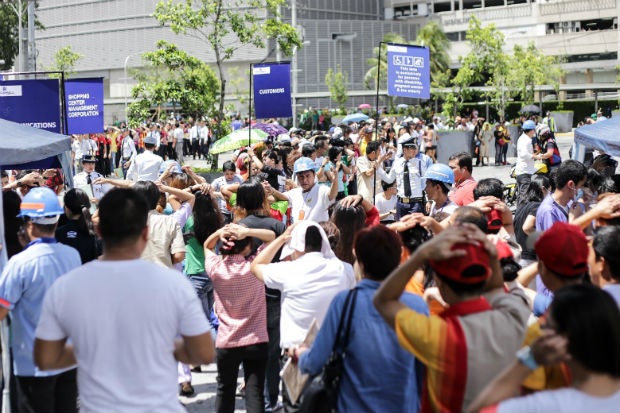 It was a mishap that an earthquake drill participant did not prepare for.

A college freshman could not stop shaking and crying after seeing a cat run over by a car entering the Veterans Memorial Medical Center (VMMC) in Quezon City minutes before the Metro-wide earthquake drill started.

“The driver did not even react, he didn’t care,” the upset student from Asia Pacific School of Arts told the Inquirer. She said she had pet cats at home.

“She was shocked. It was brutal,” said a classmate, who took the distraught friend to a medical team because she had difficulty breathing.

Several participants from various villages in Quezon City were irked when relief distribution was stopped during the drill at the VMMC.

“I have a stub but they wouldn’t give me a relief pack. They said I need a card, why didn’t they tell us that before?” a woman said.

“They still have a lot of relief packs but they already stopped distribution,” another woman said.

The women from Barangay Commonwealth, Tandang Sora and Bagong Silangan felt it would be reflective of what will happen in a real disaster.

Hazel Militante of the Department of Social Welfare and Development (DSWD) said the relief packs were not all intended to be distributed during the drill.

To get a feel of actual scenario, some relief packs were distributed to participant-“evacuees” who were preselected by the Metropolitan Manila Development Authority, Militante said.

“Many did not receive a relief pack. Although we are ready, we have enough family food packs and hot meals, the incident commander has announced the termination of the drill so we stopped distribution,” she said.

She also said the stubs were issued at the MMDA registration of evacuees. The DSWD has a separate registration where the evacuees are interviewed by social workers; they will then be given family access cards which they will present to the relief distribution tent.

“The family access card is a way to identify them. So we would know they are victims and when they seek help, we have their record,” Militante said.

She said she recognized the gap and would recommend a combined MMDA/DSWD registration in the interagency postevaluation.