Lacson: I have proof 2015 budget laced with ‘pork’ | Inquirer News

Lacson: I have proof 2015 budget laced with ‘pork’ 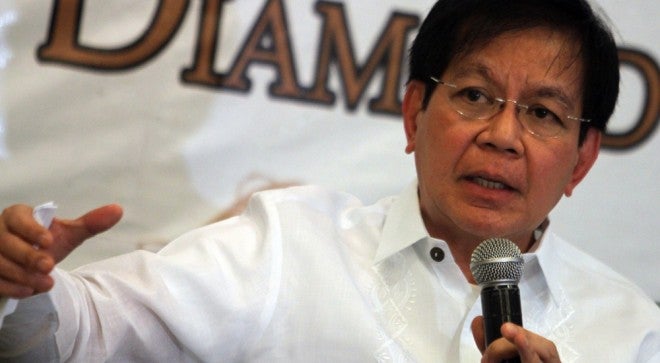 Former senator Panfilo “Ping” Lacson said he is now ready to question before the Supreme Court the “resurrection” of the legislators’ priority development assistance fund (PDAF) also known as pork barrel funds and Disbursement Acceleration Program (DAP) in the 2015 nation budget, saying he has sufficient evidence to prove his claim.

Lacson said his evidence includes documents and photographs showing that congressmen have identified “pork” projects in this year’s national budget. He said he would file the petition for prohibition at the high tribunal possibly by next week.

“We gave ourselves two weeks after the delivery of the Sona (state of the nation address) to file our petition for prohibition,” he said at a forum held at the Club Filipino in San Juan City Thursday.

“The purpose is pag na-grant ‘yung aming petition for prohibition at least we can prevent the implementation of certain provisions in the GAA (General Appropriations Act) of 2015 para ‘di lumala pa ‘yun situation because ngayon we have evidence, we have photographs, we have documents to show that indeed PDAF andiyan very much alive and kicking,” he further said.

(The purpose is if our petition for prohibition is granted, at least we can prevent the implementation of certain provisions in the GAA (General Appropriations Act) of 2015 so the situation will not get worse because now we have evidence, we have photographs, we have documents to show that indeed PDAF is there , very much alive and kicking,”

Lacson pointed out that whether the identification of the projects was made before or after the approval of the 2015 budget, “legislators have no business identifying projects (because their role in the budget is to) deliberate, introduce amendments and oversight.”

But it’s a different issue, he said, when the legislators themselves were involved in the identification of their pet projects in their respective districts.

Lacson said the names of the legislators, who identified projects, would be named in the petition but he refused to name them.

“They will be named as a matter of course kasi ‘yung documents would name them without us intending to identify them but since the documents that we have bear their names , lalabas talaga ang pangalan nila (their names will really come up),” he said.

So far, he said, the evidence he has pertained to congressmen who have identified infrastructure projects.

“So far, wala kami sa Senate. Puro congressmen pa lang ‘yung nakita namin (So far, we have nothing in the Senate. What we’ve seen are mostly congressmen),” he said.

Asked what would be the liabilities of the said legislators, the former senator said: “Well, let’s see . We’ll proceed from there. Assuming that the Supreme Court will rule na OK, na grant ‘yung prohibition (grant the prohibition), then they could be liable to some criminal acts.”

The Supreme Court has earlier declared the PDAF and parts of DAP unconstitutional. IDL