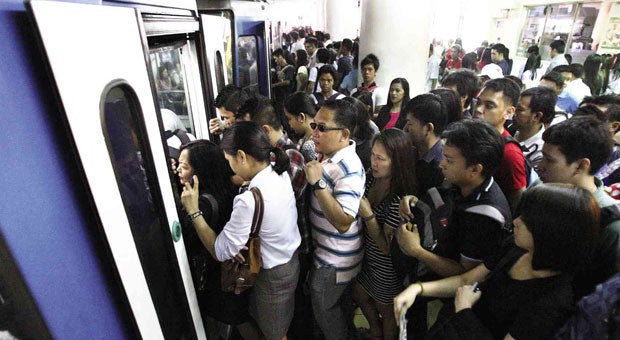 Long queues of passengers make their way inside an MRT train. FILE PHOTO

Here’s the government’s response to calls to improve the services of the Metro Rail Transit (MRT-3): Revive a 2013 proposal to field passenger buses on Edsa to transport some MRT commuters from one station to the other during the morning rush hour.

Under the MRT Bus Project of the Land Transportation Franchising and Regulatory Board (LTFRB) which started on Monday, 40 buses will be deployed daily to pick up or drop off passengers at selected MRT stations on Edsa between 6 a.m. and 9 a.m., Monday to Friday.

Under a special permit, the MRT buses will be exempted from the number coding scheme. They will also be allowed to ply underpasses and flyovers unlike regular buses, a privilege expected to reduce their travel time by around 30 minutes, according to LTFRB executive director Roberto Cabrera.

The MRT buses will ply only the southbound lane of Edsa, picking up passengers from just two points: MRT’s North Avenue and Quezon Avenue stations. There will also be just two drop-off points: Ortigas and Ayala stations.

“The rationale behind [the project] is that we, from the Department of Transportation and Communications, would just like to help alleviate the lines that we have along the MRT stations,” Cabrera said.

“If you look at the total…MRT [passengers], obviously it will hardly make a dent. But if you look at it from the point of view of even 10 passengers who would like to have a more comfortable [and less crowded] ride, who don’t have time to wait in line or would just like to go to Makati earlier, we’re just offering an alternative,” he added.

Each of the air-conditioned buses can carry around 55 to 60 passengers per trip, Cabrera said. They will charge fares equivalent to those charged by the MRT between stations.

Cabrera said the project was a takeoff from the 2013 MRT Bus Link project which was shut down by the Metropolitan Manila Development Authority (MMDA) because the buses plied flyovers and underpasses without the MMDA’s approval.

“That was the start of what we were trying to achieve. But now, we have the full cooperation of the MMDA so it’s easier to implement,” Cabrera told the Inquirer.

In the first two days of the project’s implementation, there were only a few passengers, which Cabrera attributed to the lack of information about the bus service.