Why no mention of SAF 44? | Inquirer News
Close
menu
search 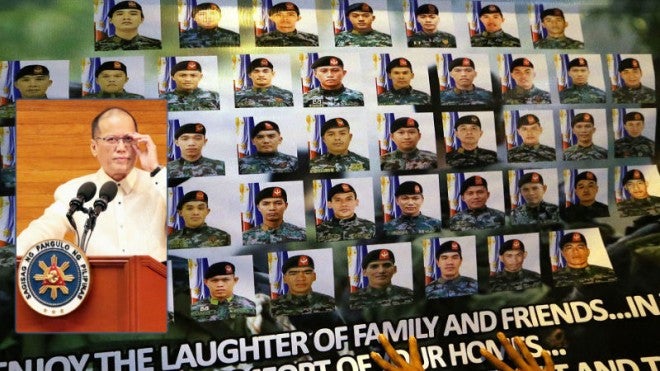 For Erica Pabalinas, President Benigno Aquino III’s State of the Nation Address (Sona) on Monday was a letdown.

Mr. Aquino mentioned the killing of Zulkifli bin Hir, alias “Marwan,” in his two-hour speech as one of the achievements of his administration, but said nothing about the 44 Special Action Force (SAF) commandos who were massacred during the operation against Moro rebels that took out the Malaysian terrorist in Mamasapano, Maguindanao province, on Jan. 25.

Pabalinas, widow of Senior Insp. Ryan Pabalinas, spoke on behalf of the next of kin of the slain SAF troopers during the nationally televised necrological services, tearfully pleading to Mr. Aquino on the stage with her “for help to attain justice.”

On Tuesday, in a telephone interview from her General Santos City home, Pabalinas told the Inquirer: “I’m just saddened by the fact that there was no mention (of it). He could have thanked those who sacrificed their lives… He just showed that he is just good for his own interest.”

Merly Gamutan, widow of Insp. Joey Gamutan, who was also killed in the Mamasapano operation, said she did not watch the Sona “because I know there was nothing to it.”

“He’s guilty, that’s why he did not mention the SAF 44,” Gamutan said, echoing the sentiments of some of the widows who blamed Mr. Aquino for the massacre that set back the President’s timetable for the setting up of an expanded autonomous Bangsamoro substate under a peace agreement with the Moro Islamic Liberation Front.

Rico Erana, father of slain Senior Insp. John Gary Erana, said: “If not for him (President Aquino), the SAF 44 would still be alive today. It is as if he doesn’t care that it happened. In his Sona, he did not give importance to the lives of those killed just to get Marwan.”

Communications Secretary Herminio Coloma Jr. said the President had no intention of belittling the heroism of the SAF 44, pointing to a Feb. 6 statement by Mr. Aquino on the Mamasapano debacle, declaring “I will carry this until the end of my days.”

A day after his sixth and final Sona, Mr. Aquino was slammed for glossing over what critics described as major problems that required the President’s attention in the final 11 months of his administration—the mass transport woes; rehabilitation of areas ravaged by typhoons, an earthquake and the siege of Zamboanga province; rampant smuggling of agricultural commodities; and the long-pending freedom of information bill that would give substance to his avowed legacy of daang matuwid, or straight path.

Former Sen. Panfilo Lacson said that one of the President’s misses in his Sona was his failure to acknowledge the pork barrel funds or lump sums in the 2015 budget.

Lacson questioned how the President could comply with the Supreme Court ruling declaring unconstitutional the Priority Development Assistance Fund and Disbursement Acceleration Program in November 2013 and July 2014, respectively, when there were at least P424 billion in lump sum funds in the 2015 budget.

“It’s too early for a valedictory speech. Anyway, he still has 10 months to thank those who helped him in his administration,” Lacson said in a text message.

He said the President also failed to discuss rehabilitation efforts in provinces devastated by Supertyphoon “Yolanda” (international name: Haiyan) in 2013 and the progress in the Mamasapano probe, specifically those who should take responsibility for the massacre of the SAF 44.

Lacson served as presidential adviser on reconstruction and rehabilitation. He does not feel slighted that he was not mentioned in the President’s long-winded thank you list in his Sona.

“In the 14 months I was in the Cabinet, I never entertained the illusion that I belonged. Not once did I feel I was a member of the family,” said Lacson, who resigned last February.

Duterte has earned the ire of human rights advocates because of his tough stance against drugs and criminality.

In a text message, Abad said that Briones “shoots from the hip.” He said that P88.96 billion had so far been released for the Yolanda victims.

“More Filipinos will likely pay a heavy price for the failure to press for greater accountability for alleged abuses by the state security forces,” Conde said.

“The cost of that failure will be a rising body count from extrajudicial killings, enforced disappearance and torture,” he added.

The President also failed to mention the overseas Filipino workers (OFWs), whose remittances in the country increased during the Aquino years—from $18.76 billion in 2010 to $26.92 billion in 2014.

Inorissa Sialana-Elento, executive director of the Mindanao Migrants Center for Empowering Actions Inc., said an average of 5,000 Filipinos are leaving their families to seek jobs in 197 countries every day.

“The families they leave behind need support to adjust with their breadwinner far away from them,” Elento said.

“We remember the case of Mary Jane Veloso, which highlights the lack of government legal and diplomatic support to help our fellow Filipina,” Elento said. “Until now, there are 80 other OFWs on death row in various countries awaiting help.”

“We were hoping that the President would have said something on wanton importation and the worsening smuggling of agricultural commodities, where the government was deprived last year of almost P9 billion in revenues,” according to Rosendo So, chair of Samahang Industriya ng Agrikultura.

Citing official reports, So said said the government could have lost P8.4 billion last year to the illegal traffic of six agricultural commodities.

“Rice smuggling alone deprived this government of P5.6 billion, with a market value of almost P21 billion, So said.