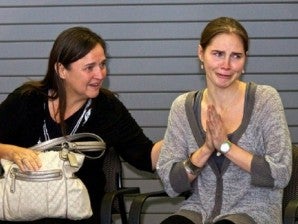 Amanda Knox (R) acknowledges the cheers of supporters while her mother Edda Mellas comforts her on October 4, 2011 in Seattle, Washington. American student Amanda Knox arrived back in hometown of Seattle, WA from Rome, Italy after she and ex-boyfriend Raffaele Sollecito won the appeal against the conviction in 2009 of killing their British roommate Meredith Kercher in Perugia, Italy in 2007. The pair had served nearly four years in jail after initially being sentenced to 26 and 25 years respectively. AFP/Stephen Brashear/Getty Images

SEATTLE – A plane carrying Amanda Knox home landed in Seattle on Tuesday, a day after she was acquitted of murder and sexual assault charges and freed from jail in Italy.

The British Airways aircraft carrying Knox and her family landed at Seattle-Tacoma International Airport, where the 24-year-old and her family were expected to address the media after clearing customs.

TV pictures showed the 747 aircraft pull into the gate, to let passengers including the Knox family – who went through a VIP lounge when they transited in London – into the terminal.

Her family has pleaded for privacy saying Knox had endured an “ordeal” and a “nightmare.” But a staging area was set up below the main terminal, where the former University of Washington student could make a statement.

Security was tight as journalists from around the world were camped out to greet Knox – who has not yet spoken publicly – and her family when their plane landed a few minutes ahead of schedule.

“We are in a state of heightened alert,” said airport spokesman Perry Cooper, adding “but this is not super unusual for us, we do the same kind of thing for major celebrities and so on.”

Knox left Rome swiftly after the decision was handed down by an Italian court, first heading for London where she boarded the connecting flight to her hometown of Seattle on the US west coast.

Knox had been convicted along with two others and sentenced to 26 years in prison for taking part in the murder and sexual assault of her British housemate Meredith Kercher, then 21, who was found stabbed to death in the cottage they shared.

Knox’s ex-boyfriend Raffaele Sollecito, who also had appealed his conviction on the same charges, was likewise acquitted Monday in the university town of Perugia in central Italy where Knox and Kercher were studying.