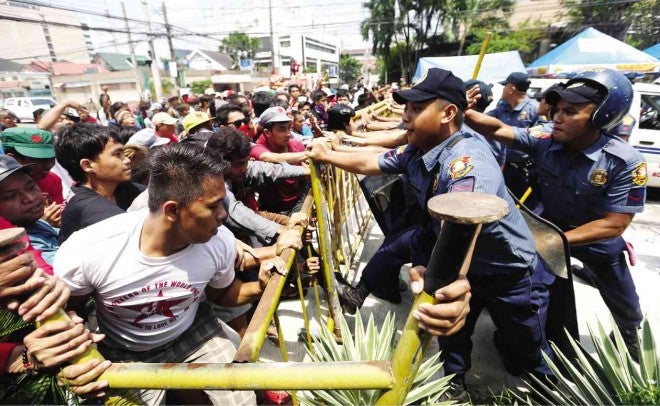 PRE-SONA SCUFFLE Militants belonging to Bagong Alyansang Makabayan and other groups try to get past metal barriers put up by policemen during a protest on Times Street in Quezon City, where President Aquino’s residence is located, on the eve of his final State of the Nation Address. LYN RILLON

President Aquino will deliver Monday his sixth and final State of the Nation Address (Sona) before a joint session of the Senate and the House of Representatives at the Batasang Pambansa complex in Quezon City.

Like in his first five Sonas, this year’s report will be about the President’s “story of governance.”

Malacañang has been mum on the theme of the President’s final Sona, its length—barring the usual rounds of applause and video presentations on facts and figures—and other important details of the address.

But Aquino’s valedictory is expected to highlight the accomplishments of the administration, the results of his promises to his “bosses”—the Filipino people—and plans in his final year in office on his “daang matuwid,” or righteous path, reform program.

According to the Palace, the highly anticipated speech will also serve as a guide for Filipinos in the transition to the next administration.

Earlier, in a statement, Malacañang said Aquino would deliver Monday a “comprehensive report” to the nation and “affirm how he lived up to his promises” under the 16-point Social Contract with the Filipino People, his platform of government.

Aquino has vowed to push for anticorruption measures, antipoverty programs, employment and inclusive growth, improved education, advancement of public health and responsible parenthood, impartial justice system, long-term peace in Mindanao, protection of overseas Filipino workers (OFWs), impartial execution of government policies not based on private interests, food security and improvement of the rural economy, urban development, promotion of big and small businesses, protection and motivation of civil servants (including military and police personnel), appointment of qualified and competent officials, sustainable use and protection of natural resources, and promotion of gender equality.

Coloma reported that the President “consistently earned high levels of approval and trust by dint of his personal integrity.”

“For the past five years, the average GDP (gross domestic product) growth of 6.3 percent has been the highest attained by the country in the past four decades. This is the fastest growth rate of any nation in the Association of Southeast Asian Nations region and the second-fastest in the Asia-Pacific region,” he pointed out.

Government spending, he said, “has been aligned with the foremost national development objective of achieving inclusive growth.”

“From only 800,000 (poorest of the poor) families, there are now more than 4.4 million families that directly benefit from conditional cash transfers that are part of an expanded social safety net and social protection programs. The largest portion of the current national budget (37 percent) is allocated for social development and poverty reduction,” he said.

According to Coloma, “the number of OFWs has declined from 10 million to 8.4 million, while domestic job creation has been sustained, resulting in a reduction of the unemployment rate to 6.6 percent in January.”

The administration also “delivered substantially on its promise to oversee the transformation from justice that money and connections can buy to a truly impartial system of institutions that deliver equal justice to rich or poor,” he said.

In its final year in office, it is “firmly determined to further improve the delivery of essential public services that strengthen public institutions so that we can build even stronger foundations for a sustainable and inclusive growth and progress that could be its legacy to future generations of Filipinos,” he added.

“He is entering his lame-duck phase and he’s losing influence by the day,” said Ramon Casiple, executive director of the Institute for Political and Electoral Reform.

“He should use his remaining political capital and tell Congress to pass the BBL,” Casiple said, referring to the draft Bangsamoro Basic Law that would create the autonomous Muslim region in the south and is the centerpiece of a peace plan with the Moro Islamic Liberation Front.

The measure has languished in Congress due to outrage over the deaths of 44 police commandos in an encounter with Moro rebels. Aquino is expected to urge Congress to quickly pass the draft law, the main barrier to implementing the peace pact, according to his advisers.–With a report from AFP

The best, worst of Aquino as orator: Inaugural, 2nd Sona speeches stand out