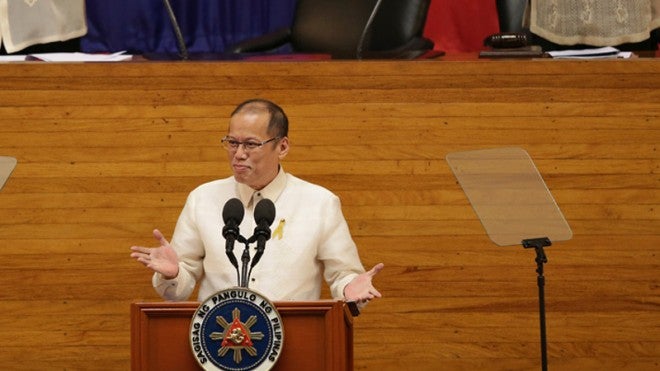 In his fifth year in office, President Aquino performed below expectations, especially in areas of managing the economy, public finance, health and agriculture, according to a coalition of good governance advocates.

The President was rated 5.9 for 2014 on a scale of 1 to 10, in which 10 is the highest, the scorecard of the multisectoral Movement for Good Governance (MGG) showed.

MGG started benchmarking the performance of the Aquino administration using a data-based assessment that does not rely on perception, impressions and anecdotes.

“The scorecard is a tool that can track program implementation,” MGG said, noting this benchmarking system can direct attention to strengths as well as gaps that need reinforcement.

“The assessment study is meant not to be a critique but a tool for identifying successes and alerting the government on areas that need strengthening and improvement,” it said.

Based on the report released ahead of Aquino’s final State of the Nation Address (Sona), the grade in his fifth year was below the minimum score of 7.5 for the promises he made at the beginning of his term to be considered “on track.”

The President’s grade, however, is above 5—which means “something has been accomplished but is lower than expected.”

His scores in the areas of managing the economy, public finance, health and agriculture were lower than those in the previous year.

One area where he scored relatively better was in governance, where a score of 7.0 was given, the same as the score in 2013. 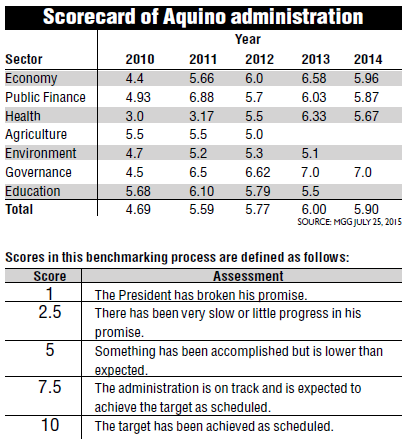 The MGG said it “notes with favor the success of the Aquino administration in employment generation, in maintaining macroeconomic stability, the rapid expansion of the National Health Insurance Program, reduction in the incidence of mortality rates for malaria and tuberculosis, and increasing subsidies to the poor to obtain healthcare.”

“The initiatives to increase transparency through the mandatory disclosure of budget information by national government agencies, the continuation of the performance incentive scheme for local governments under the Seal of Good Local Governance and the significant strides in the fight against corruption are commended,” the group said in a report issued on Saturday.

It also recognized the benefits of the conditional cash transfer program to the poorest households, saying the program increased per capita consumption of food, clothing and education.

But MGG said lower scores were given to the government’s performance in the economy due to the drop in gross domestic product (GDP) growth rate in 2014, inability to increase exports relative to the target (the export to GDP ratio was 45.99 percent in 2014, or below the target of 64.3 percent by 2016) alongside the increase in poverty incidence from 24.7 percent in 2013 to 26.8 percent in 2014.

On economic management, Aquino scored 5.96 in 2014 compared with 6.58 in the previous year. Although the Philippines remained the fastest-growing economy in Southeast Asia, GDP growth softened to 6.1 percent in 2014, down from 7.1 percent in 2013 and 6.7 percent in 2012. “It is clear that sustained high growth has not occurred,” the report said.

On public finance, MGG noted that deficit management was brought about largely by underspending, which contributed to the inability of government to meet growth targets and to provide adequate service delivery in health and support services to farmers.

The report also noted that the Philippine tax effort barely inched up to 13.6 percent of GDP in 2014 compared with 13.5 percent in 2013. Tax effort refers to the ratio between the share of the actual tax collection in GDP and taxable capacity, thereby indicating how well a country is doing in terms of tax collection, relative to what could be reasonably expected given its economic potential.

MGG noted the “empowering” potential of “bottom-up budgeting” but cited the need for greater transparency in how the projects proposed by communities get to be approved.

In contrast to “top-down” budgeting, the bottom-up type seeks to determine the underlying costs for each individual segment of an organization and then total up each department. Because it involves grassroots planning, it is traditionally deemed to be accurate and more morale-boosting because it is participatory in nature.

For public finance, the President scored 5.87 in his fifth year in office compared with 6.03 in the previous year.

— “Unequal” distribution of healthcare personnel, resulting in a ratio of about three health personnel for every 10,000 of the population.

— “Alarming” 587-percent increase in the incidence of HIV cases.

“Lack of affordable services, lack of transportation, unavailability of facilities, as well as the lack of information on the benefits of health insurance coverage, were cited as the reasons why Filipino mothers do not seek consultation in healthcare facilities,” MGG said.

In agriculture, the administration received a score of 5, lower than the previous 5.5. MGG said there was “very little” progress, if at all, in the agriculture sector as sectoral growth slowed down to 2.1 percent annually compared with 2.8 percent during the Arroyo administration.

“The inability of the administration to provide agriculture with the needed and strategic support largely affects the very limited success of government to reduce poverty in the rural areas,” the coalition said.

Yield from coconut, MGG said, declined by 1.5 percent annually while livestock production grew at a snail pace of 1.5 percent.

It said the focus on rice sufficiency deprived other products of better market and income prospects as well as needed support and resources.

In terms of productivity in coconut and sugarcane in Southeast Asia, the Philippines was the worst performer, the coalition said.

The country continued to have the lowest level of agriculture exports in the region at $6.1 billion, an amount that pales in comparison with $47 billion in Thailand.

The area where Aquino scored the highest was in governance. MGG gave him a score of 7, maintaining the score in the previous year.

The group said gains in the fight against corruption were notable resulting in a marked improvement in the Philippine ranking in the Transparency International Corruption Index. In this benchmark, the Philippines ranked 85 out of 175 countries in 2014, improving from 105th place in 2012 and 94th place in 2013. The score of the Philippines in the Economic Freedom Index improved by 2.1 points to 62.2 in 2015.

“However, corruption issues continue to be a serious cause for concern, especially in the bureaucracy and the judiciary,” MGG said.

With this scorecard, MGG, which was formed in 2008, said it hoped to contribute to the effort of assessing how the administration remained faithful to its contract with the Filipino people.

“MGG believes in empowering the citizens through an objective assessment of the performance of elected public officials based on their platforms,” it said.

Read Next
After food poisoning, candy sales down
EDITORS' PICK
Tips for a cheerful life
Petecio ‘blessed’ as Olympic gold quest continues
Philippines to bring home multiple Olympic medals for first time since 1932
Nesthy Petecio assured of Olympics bronze, ousts Colombian foe
Harnessing technology for quality education
Connect to PH’s fastest network with new Signature Plan Lite at only P599 per month
MOST READ
Isko for 2022? Manila mayor takes a swipe at Duterte on live broadcast
Nesthy Petecio assured of Olympics bronze, ousts Colombian foe
Lacson bares talks with Robredo ahead of 2022 polls
Gordon in talks with Robredo for possible ‘partnership’ ahead of 2022 polls
Don't miss out on the latest news and information.