Aquino will finish term with AFP modernization still in limbo 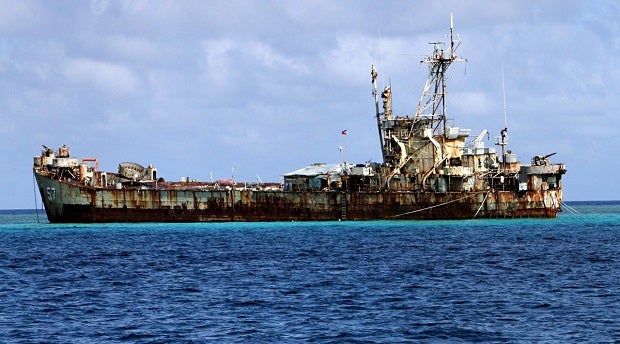 Due to many years of neglect, the Philippine military has become nearly obsolete and has had to rely on hand-me-downs.

When President Benigno Aquino III was sworn into office, he vowed to rejuvenate the Philippine armed forces, once the strongest but turned one of the weakest in Asia.

Gone are those days of struggle because the capability upgrade for the military is coming, Aquino said during his second State of the Nation Address.

Aquino assumed office amid China’s aggression in the West Philippine Sea (South China Sea). Under his leadership, the Armed Forces of the Philippines acquired military assets — both refurbished and brand new — that would help build a minimum credible defense.

“The President shows that he is sensitive to the needs of the Armed Forces in making the AFP modernization a top priority,” Defense spokesperson Peter Paul Galvez said.

“He wants to upgrade the capability of the AFP so that our soldiers, marines, sailors and airmen and women are able to more efficiently and effectively perform their missions, duties and responsibilities,” he added.

Under Aquino’s leadership, he has so far completed 55 modernization projects that cost about P11 billion.

In his speech at the Air Force anniversary in June, he said only 45 projects were completed by the three previous administrations combined.

In Aquino’s fifth Sona in 2014, he cited his accomplishments and the projects on the way.

“Today, I am glad to report to you the ongoing modernization of the AFP. We have acquired brand new assets, including 8 Sokol Combat Utility Helicopters, 3 AgustaWestland-109 helicopters, and the first landing craft utility ship built right here in the country: the BRP Tagbanua. 4 refurbished UH-1 helicopters and 2 navy cutters have also arrived. This past May, we also inaugurated the Naval Forces West’s state-of-the-art Command Center in Palawan,” he said.

In 2014, the Philippine government also signed the acquisition of 12 FA-50 lead-in fighter jets. The first two are expected to arrive late 2015.

“We expect the rest to be delivered in 2017. We are also targeting the acquisition of an additional 8 Bell combat utility helicopters, 2 anti-submarine helicopters, 10 more AgustaWestland-109 helicopters, 2 light-lift aircraft, 3 medium-lift aircrafts, radar systems, all of which are brand new. These, along with other new equipment, will boost the capacity of our Armed Forces,” Aquino said.

But despite the acquired assets, the AFP modernization program is still under fire as the Malacañang has yet to approve it two years after the bill was signed into law.

At least 20 projects worth P60.14 billion — including ships and air assets—face delay because there are no funds for it. These include Navy frigates, three air surveillance radar, and six close air support aircraft, Army radios and amphibious assault vehicles.

The Department of National Defense also made it to the news over the purchase of P1.2 billion worth of choppers that was partially terminated for not being delivered on time. Only six of 21 units were delivered.

There were also allegations there was a kickback in the deal but Defense Secretary Voltaire Gazmin had already denied this.

The defense department was also criticized after the suspension the purchase of shore-based missile system worth P6.5 billion to purchase helmets, body armor, night vision goggles and radio equipment. The SBMS project would have been useful to counter China’s increasing threat in the disputed seas.

The modernization program is divided into three horizons.

The “first horizon” is until 2017 and discussions have started for the items to be acquired for the second horizon (2018 to 2023). The third horizon will be from 2023 to 2028. No estimates have been given how much would the budget be for the next two horizons.

Aquino will finish his term in 2016 and the fate of the next two horizons of the modernization program of the Philippine military will depend on his successor. TVJ

The price AFP needs to pay to become ‘heavyweight’ military