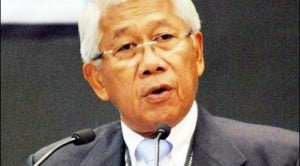 MANILA, Philippines—A total of 36 modernization projects worth P41.2 billion have been so far completed and awarded under the leadership of President Benigno Aquino III as part of the military’s modernization upgrade.

“We are steadily addressing our Armed Forces’ capability upgrade. Our bids and awards committees at the DND are doing their best to fast-track our acquisitions, while fully adhering to the established rules and procedures set by law,” Defense Secretary Voltaire Gazmin said in a statement.

In 1995, then President Fidel Ramos signed the AFP Modernization Act, intended for 15 years, in a bid to develop a credible armed forces, but was not given priority in the succeeding administrations because of the Asian financial crisis in 1997 and had been neglected since.

The revised modernization act was signed for another 15 years in 2012 under the Aquino administration to modernize the armed forces, with an allocation of P75 billion for the first five years of implementation.

Funding of the modernization programs will come from general appropriations, proceeds from the Malampaya gas project, remittance from the Bases Conversion and Development Authority and Aquino’s pledge to provide P632.18 million annually until 2015.

The first half of Aquino’s term saw the acquisition of two US Coast Guard Hamilton ships for the Philippine Navy—the BRP Gregorio del Pilar and the BRP Ramon Alcaraz. Both four decades old, the weather high endurance cutters are now deployed to the contested waters of the West Philippine Sea.

A total of sixteen projects were completed for the Navy worth P5.3 billion. It is expecting the delivery of P6.4 billion worth in projects, including the acquisition of strategic sea-lift vessels, additional naval helicopters and amphibious vehicles, the DND said.

For the Philippine Army, there were 12 projects completed amounting to P2.8 billion. It includes trucks, field ambulances. Awaiting delivery in the next two years are trucks, armored vehicles and assault rifles.

Four projects worth P3.7 billion have been completed for the Air Force. It includes the acquisiton of 18 units of basic trainer aircraft worth P621.67 million and eight combat utility helicopers worth P2.86 billion.

Awaiting in the pipeline are P5.6 billion worth in projects, including the acquisition of light-lift aircraft and attack helicopters for delivery in the next two years.

Twenty-one units of Huey helicopters are for delivery within the first semester of the year, the DND said.

Two projects were also completed for the AFP General Headquarters worth P445 million. These include the upgrade of the operating rooms of the AFP Medical Center and the acquisition of the GHQ fixed communication system.

The government arsenal, meanwhile, also had two completed projects which include the acquisition of raw and input materials for the GA bullet assembly machine worth P130.9 million.

This year will be the delivery of equipment for the manufacture of ammunition worth P335 million.

The DND said that under the revised AFP modernization program, there is a budget of P85.3 billion for 2013-2017. The Army will be allocated P8.6 billion, the Air Force will have P43.3 billion, the Navy will have P28.2 billion and the General Headquarters will have P5.2 billion.