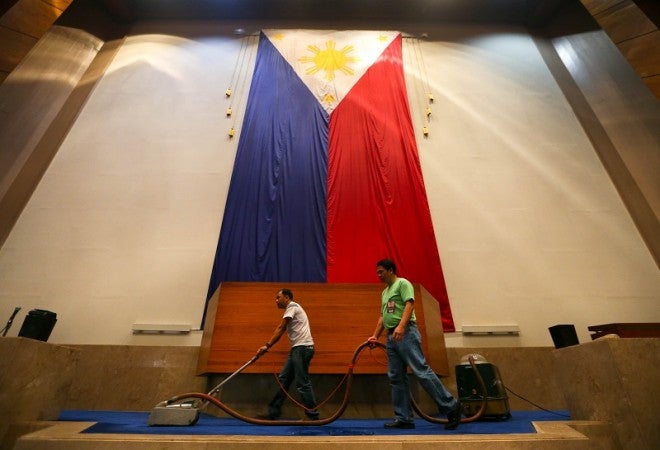 HOUSE CLEANING FOR SONA Two men vacuum the carpet just below the podium in the Plenary Hall of the House of Representatives in preparation for the last State of the Nation Address of President Aquino on Monday, July 27. LYN RILLON

MANILA, Philippines–Each guest at President Aquino’s final State of the Nation Address (Sona) on July 27 may partake of P700 worth of food and drinks, an amount equivalent to an eat-all-you-can treat at popular restaurants in Metro Manila.

The Sona will be special but not particularly lavish, said Marilyn Barua-Yap, secretary general of the House of Representatives.

Yap said the House protocol office picked the caterer Center Table to provide food to members of the diplomatic corps and other officials.

“For the traditional cocktails for the diplomatic corps and other officials at the South Wing, we are expecting between 700 and 800 guests, probably 800. The budget is P700 per cover,” she said, meaning for food and beverage served for each guest.

Yap said the caterer, a first-timer, gave the lowest price among those considered.

Another catering company called La Plaza was chosen to provide the traditional lunch for the Speaker and other House members before the Sona at 4 p.m.

The House session hall can accommodate a maximum of 2,750 people. Yap said invitations had already been sent to more than 2,700 people.

The first Sona of a new President and the last one of an outgoing President traditionally attracts the largest attendance, Yap said.

In a press briefing at her office, she said a budget of P2 million to P2.5 million would cover catering and reception activities.

Yap said the goal was not to exceed last year’s Sona budget of P2.3 million.

As in the previous year, other expenses, such as repairs, repainting and refurbishing of facilities, have already been incorporated in the annual operating budget of the House units, Yap said.

Ten-year-old Gwyneth Dorado, an “Asia’s Got Talent” finalist who has been chosen to sing the national anthem, will be given an allowance of P10,000 on top of a P3,000-P5,000 budget for her dress.

Asked if anything about this Sona would be special, she said: “It’s the last one [for the President]. Sona is always special. We always try to make Sona special. But what really make it special are the main actors.”

Yap said most people would be more concerned about “what the President said, what the lawmakers announced, and so on” instead of the trimmings at the Batasang Pambansa Complex in Quezon City.

But she added that security measures would be stricter than before.

“We always try to be paranoid in terms of security. It’s not really something to plan for, because we can’t anticipate what will happen. Risk and contingency factors are quite high,” Yap said.

Around the perimeter of the Batasan complex, some 3,000 to 3,500 security personnel will stand guard, she said.

Within the complex itself, there will be another 1,500-1,700 guards, including members of the Legislative Security Bureau.

They do not include the local and national police, military and Metropolitan Manila Development Authority personnel who will be deployed to the surrounding area.

Director General Ricardo Marquez of the Philippine National Police said the PNP was 99.9-percent ready for the Sona.

Marquez said the PNP was polishing the security arrangements for the President’s address at the House of Representatives and the protest rallies on Commonwealth Avenue.

“We are very much ready, at least 99.9 percent, for the Sona. We are just putting the finishing touches,” said Marquez, six days before the big event.

The PNP will conduct a final coordinating conference on the security arrangements. Top PNP officials are expected to meet on Wednesday to discuss the progress in the security preparations.

On Friday, police officials will hold a final “walk-through” of the major points leading to the House of Representatives to check the deployment and readiness of the deployed policemen.

“We will also invite the Presidential Security Group to show them our security arrangements and to see if their preparations are coordinated with ours,” Marquez said.

He said he would be manning the security plans from inside the House of Representatives, while the chief of the National Capital Region Police Office would man the advance command post on Commonwealth Avenue.

Marquez, who assumed the post of PNP chief last week, is known for overseeing the security arrangements during the papal visit earlier this year and the forthcoming Asia-Pacific Economic Cooperation (Apec) meetings.

Without going into details, he said the PNP would use a similar template of the Apec security plan for next week’s Sona, with a “whole of government approach.”

“We put on board all agencies that could help in these kinds of operations, because we know that a single agency cannot handle it alone,” he said.