Justices of the Supreme Court on Tuesday asked the counsel of the Knights of Rizal (KoR) why the group went directly to the high tribunal and bypassed the lower courts.

They also chastised the lawyer for presuming that the high tribunal could declare the Rizal monument “the soul of the nation.”

The lawyer, William Jasarino, was unable several times to respond to questions of law during oral arguments held Tuesday on the group’s petition to have Torre de Manila demolished.

At one point, Justice Marvic Leonen chastised Jasarino for failing to answer a question and instead asking the court stenographer to repeat his earlier reply.

Before banging the gavel, Justice Antonio Carpio directed Jasarino to promptly address unanswered questions in his memorandum, telling him: “We can remand it or dismiss it. You better address this issue in your memorandum.”

The central issue that surfaced during the two-and-a-half-hour oral arguments was the question of jurisdiction: Why did the KoR decide to seek redress directly in the Supreme Court instead of going to the lower courts?

Carpio pointed out that the high court had to convert the KoR’s original petition for injunction—one ordinarily for the lower courts—into a mandamus so it could be accommodated.

“We already converted your petition from injunction to mandamus, from nuisance per se to accidens (by accident). Now you ask us to try the facts?” said Carpio, who is acting Chief Justice in place of Maria Lourdes Sereno who is on a two-week wellness leave.

Carpio noted how Jasarino changed his tune, from saying that Torre de Manila was a nuisance per se to one per accidens.

“We are not a trier of facts. This requires a trial and for us to review it. You are reversing the process. That’s a big problem,” he said.

Justice Francis Jardeleza was the first to raise the issue of jurisdiction, eliciting this answer from Jasarino: “This early, your honor, I will apologize for the answer I will give. It’s public knowledge that by now it would not have been resolved. The Torre would have already been up.” 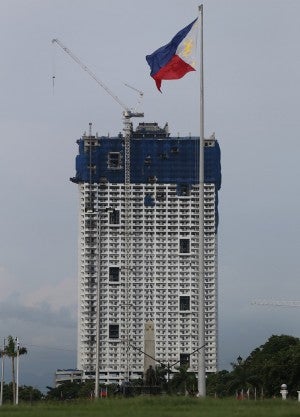 TOWERING CONTROVERSIES As if its construction—derided by heritage advocates and history lovers—was not controversial enough, the 49-story Torre de Manila made the news again when a lawyer arguing for its demolition was cited for “contemptuous behavior” yesterday by the Supreme Court for going straight to the high court instead of bringing his case first to the lower court. The new building has already been tagged a “National Photobomber” for ruining a perfect, unobstructed view of the Rizal Monument in Luneta. Torre de Manila was issued a restraining order in June this year. ARNOLD ALMACEN

Leonen felt it was unfair of Jasarino to assume that the lower courts were “excruciatingly slow and inadequate,” saying: “Don’t you think this is unfair, asking the court to bypass all the lower courts?”

“Wouldn’t it have been a matter of better prudence to first go to a lower court as a trier of facts, before we intervene?” Leonen said. Jasarino responded in the affirmative.

The magistrate likened the high court’s accommodation of the Knights’ plea to giving “special treatment.” This time Jasarino did not agree.

Under Jardeleza’s questioning, Jasarino conceded that at least two documents that the KoR invoked in its petition against the Torre had in fact no legal effect—not the National Historical Commission of the Philippines guidelines on monuments or the Venice Charter on the safeguarding of historical buildings, to which the Philippines is not a signatory.

Soul of the nation?

The 49-story condominium being built by DMCI Project Developers Inc. has been rising on Taft Avenue, 789 meters behind the Rizal monument. The Knights want it torn down for marring the sight line behind the monument.

Leonen also jettisoned the KoR’s claim that the Rizal monument was “the soul of the nation,” saying that it was not up to the court to commit this to jurisprudence.

He said the monument was “an important reminder, but it is not the only reminder.”

“We do not forget Rizal because of the view, we remember Rizal regardless of where the monument is,” Leonen said.

“For you to tell us the Rizal monument is the soul of the nation and that we should put that in jurisprudence, we cannot do that. It is tyrannical of the court to establish the narrative of the nation,” he said.

Leonen asked Jasarino if he could name a law that allows “easement of view,” to which Jasarino replied: “None that I remember at the moment.”

The magistrate said the high court did not have the power “to create a special easement of light and view” for the monument.

He also noted that it was within DMCI’s right as a private enterprise to pursue housing projects on private property.

“On the other hand, we are protecting a monument from a photobomb,” he said.

Apart from Sereno, also absent from the proceedings were Justice Bienvenido Reyes, who is on leave, and Justice Jose Perez, who recused himself on a conflict of interest, his son being a unit owner at Torre de Manila.