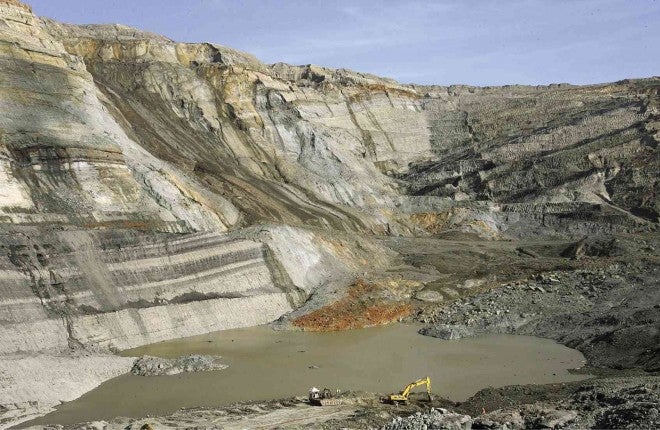 SEMIRARA, ANTIQUE—Officials of Caluya town on Monday bucked calls by legislators to close the Panian mining pit or end mining operations on

During their regular session held here, members of the municipal council spoke in defense of Semirara Mining Power Corp. (SMPC), saying that due process should be followed.

The officials challenged legislators to first find alternative jobs for the more than 2,000 employees of the company.

Antique Gov. Rhodora Cadio, along with members of the provincial disaster risk reduction and management council, had also recommended the permanent closure of the Panian pit.

The SMPC did not reply to the Inquirer’s request for comment.

Councilor Jerick Guisihan said the council will support the majority of the people who are for the continued operation of the mining firm.

Another councilor, Gregorio Yap, said closure of the mining operation would be more disastrous because thousands would lose their livelihood.

Noeli Lim, ex-officio member and barangay (village) chair of Semirara where the mining pit is located, said the residents would suffer if the operations were stopped.

But a nongovernment organization dealing with health and safety conditions in the workplace condemned SMPC and called for justice in the death of at least 16 workers at the mining pit in the last 29 months.

The Institute for Occupational Health and Safety Development (IOHSAD) said SMPC should be held criminally liable for failing to ensure the safety of its workers.

Nadia de Leon, IOHSAD advocacy officer, noted that the company had cited the continuous rain from July 1 to 14 for possibly loosening the soil which led to the accident.

“Why were the workers compelled to work in such dangerous conditions? This is a clear manifestation of how profit is placed over the workers’ safety by DM Consunji Inc., main operator of the coal mine,”De Leon said.

The DOE, which investigated the 2013 incident, cleared SMPC of any liability and allowed it to resume operations after several months.

The IOHSAD is pushing for the passage of House Bill 4635 or the Workers Safety and Health Inspection and Employers Liability Decree (Shield).

The bill, sponsored by the Gabriela Women’s Party, seeks to criminalize breaches in safety standards and impose stiffer penalties and longer prison terms on violators.

During their session, the municipal council approved the release of financial assistance to the victims and their families totaling P275,000.

On top of that, SMPC on Monday said it was providing P1 million to the families of each victim.

The company said that as of 1 p.m. Monday, the bodies of the seven who had died had been recovered and that round-the-clock search and retrieval operations were continuing.