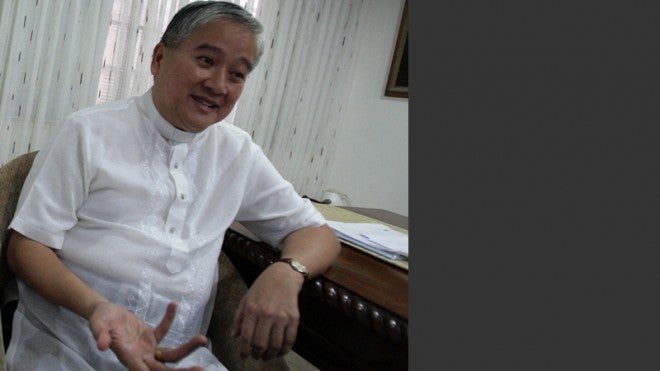 Genuine public service and mercy are not carried out by giving birthday cakes and other gifts, according to Lingayen-Dagupan Archbishop Socrates Villegas, president of the Catholic Bishops’ Conference of the Philippines (CBCP).

Addressing a query during a national convention on family and life in Cebu City last Friday, Villegas called on the electorate not to be deceived by politicians who have been providing the needs of the community, not out of charity and mercy, but our of a desire to make people feel beholden to them.

“Now, you speak about mercy with truth. That is true, because real mercy does not lie. Real mercy is not blind to the malice of lying, and has the strength to confront evil,” he said.

Villegas was asked by one of the participants during the open forum on how God’s mercy would deal with corruption, and many other forms of evil.

“The summary of God’s message is really mercy. (But) it does not mean that mercy is blind to lying, and the law. No. Mercy without law and truth is not mercy at all,” he explained.

Villegas described corruption as the absence or lack of mercy for victims of dishonesty and stealing.

“Kon magiging maawain lang ang taong corrupt, hindi lang siya magbibigay ng cakes sa may mga birthday o ng rosary para magdasal. Hindi lang yon ang mercy. (If a corrupt person wants to be merciful, he or she won’t just give cakes to those who celebrate their birthdays or rosary for people who pray the rosary),” he said.

“The person must do everything out of mercy for the poor. He or she should bear in mind that stealing public funds means robbing the poor of what they ought to receive. And if you have mercy for the poor, please do not get something, which is not yours,” said Villegas without mentioning any name.

Vice President Jejomar Binay was earlier criticized for giving out rosary bracelets with a “B” printed on the cross during his sorties in Ormoc City in Leyte and Pangasinan.

He also promised to replicate what he had done to Makati City when he was mayor: give out cakes to senior citizens during their birthdays.

But according to Villegas, genuine mercy practices honesty at all times, knowing that what one steals comes from the sweat of other people.

“Mercy does not excuse liars and violators of the law. Mercy reaches out and appeals to them so that the goodness in them will come out. We can overcome the culture of corruption if only people will have mercy and compassion to the poor and the helpless,” the archbishop said.

Villegas urged the voters to help end the system of cultural patronage in the country now.

“We should not promote a culture of patronage in our relationship with politicians. Just allow them to do what they are supposed to do,” he added.

Asked in an interview the criteria in choosing the country’s next leaders, Villegas declined to comment, saying he would have to meet all the bishops so they could decide as a body.
Villegas was among the guests during the three-day National Convention on Family and Life held at the Summit Circle Hotel in uptown Cebu City from July 16 to 18.