A gospel serenade of deep baritones echoed through a dim alley in one of Manila’s red light districts on a humid Sunday evening — the joyful sounds emanating from a rare religious outpost for gay Filipinos.

In the small room, where a rainbow flag hangs next to a lace-covered crucifix at an altar, a few dozen worshippers raised their hands in prayer as sex workers strutted in front of fleabag motels on the street below.

Tucked away above a seedy bar, the makeshift protestant church is a safe haven for gays who for decades have struggled for acceptance in the conservative Roman Catholic society.

“We are a sanctuary for those who are heavily burdened. If you are suffering because of bigotry, you can come here to unload,” Metropolitan Community Church (MCC) pastor Kakay Pamaran told AFP.

Like many in her flock, the 33-year-old former television commercial producer agonized her entire life trying to reconcile her sexual orientation with the Christian faith that she was born into.

Pamaran said she led a “double life”, keeping a girlfriend and going to church with her conservative parents who tried to ignore her being a lesbian.

“I was taught that being gay is an abomination. I struggled as a Christian because I feel there is nothing wrong with me,” she said, preparing that evening’s sermon on her smartphone.

At the MCC, which says it is the country’s biggest gay-friendly church, Pamaran said she learned that: “God’s diversity is manifested in God’s people.”

Gay pride marches and pageants are freely staged across the Philippines, and a primetime television soap about two gay men was a major hit. But barriers remain.

Michael Mia, a 42-year-old call center worker, recalled how his former born again church tried to “restore” him to heterosexuality when he came out as gay.

Mia said pastors vigorously prayed over him, made him date women, fast and memorize the Bible to “cure” him.

“I almost gave up on God. I thought I was born to be a sinner and will go to hell just because I’m gay,” he told AFP. 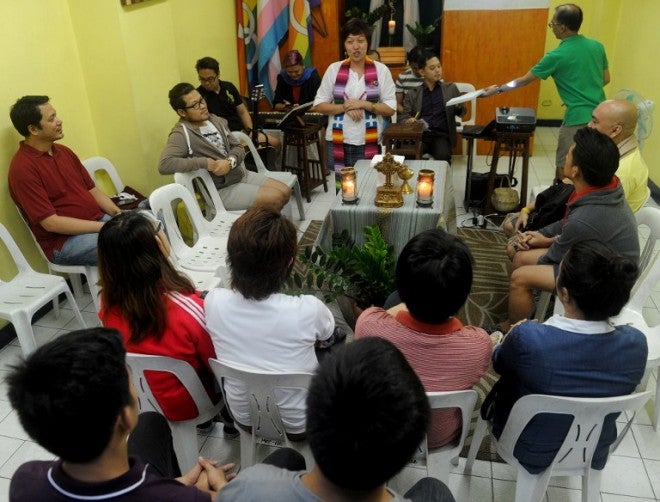 In this photo taken on July 5, 2015 pastor Kakay Pamaran (C) preaches the gospel in a Lesbian, Gay, Bisexual, and Transgender (LGBT) church in Manila. A gospel serenade of deep baritones echoed through a dim alley in one of the Philippine capital’s red light districts one humid Sunday evening — the joyful sounds emanating from a tiny religious outpost for homosexuals. AFP PHOTO / Jay DIRECTO

Eighty percent of the Philippines’ 100 million people are Catholics and the church’s conservative views still have a deep influence throughout society as well as government policy.

On a visit in January, when crowds thronged the streets, Pope Francis spoke out against “confusing” versions of sexuality, marriage and family, saying these were under attack.

The Philippines is the only country outside of the Vatican where divorce is outlawed.

Abortion is also illegal. Homosexuality is not a crime, but an anti-discrimination bill has languished in parliament for two years.

And while the Catholic Church does not officially condemn homosexuality, anti-gay sentiments from its local leaders are never far from the surface.

“In Sodom and Gomorrah, there were same-sex activities and God destroyed these cities in a hail or fire and brimstone,” Archbishop Emeritus Oscar Cruz, one of the Philippines’ most senior bishops, told AFP when asked about MCC, citing the Bible.

“Even among animals, a union is between a male and a female. How can they (gays) possibly generate their own kind?”

But MCC does not subscribe to a “literal” interpretation of the text, Pamaran said.

“There is no one way to read scripture. God is much larger than the Bible. God did not stop speaking after the Bible was published.”

Founded in the US and operational worldwide, the MCC has five Filipino churches since its first service 24 years ago.

However they are tiny communities, each having just several dozen members.

Pamaran’s church is located in seedy Cubao, where authorities in the capital city of 12 million people have tried to funnel other taboo but rampant practices like prostitution and quack medicine.

In a room no bigger than a small classroom, it recently welcomed a 17-year-old boy who attended for the first time. He said he stopped going to the Catholic Church several years ago after coming out.

“I told God, I miss you. That’s why I came here,” said the weeping college student, who said he learned about the MCC from the internet.

During communion, a choir of men wearing tight shirts, shorts and slicked-back hair sang an unlikely praise song, the Whitney Houston and Mariah Carey duet “When You Believe.”

Pamaran said church membership was growing and members were reaching out to their communities.

But Pamaran conceded that full acceptance is a long way off.

“I don’t have illusions of assimilation into the mainline Catholic Church. They will always resist anything that disrupts their order,” she said.

“We have a long way to go… but we must never lose hope, fighting for what is right and what is ours.”