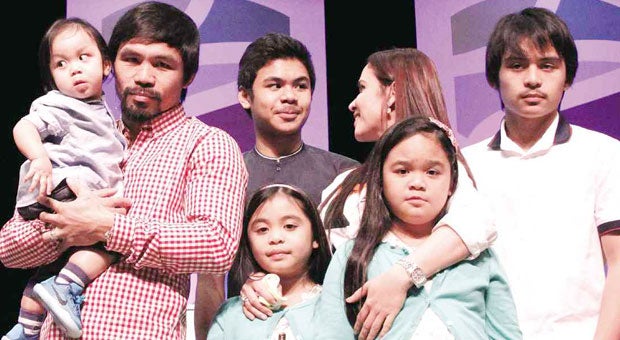 TOGETHER The Pacquiaos oblige photographers after a Sunday Bible service at Shepherd’s Church in Los Angeles before his May 2 fight with Floyd Mayweather Jr. The kids are Israel, Michael Stephen, Queen Elizabeth, Mary Divine Grace and Emmanuel Jimuel. Aquiles Z. Zonio/Inquirer Mindanao

MAASIM, Sarangani—The Pacquiaos have pulled out their four children from an international school to enroll them in a private school in General Santos City. The two older sons have been overheard to speak English with a British accent.

The boxing champion himself said he wanted his children to experience what he went through as a poverty-stricken youth in General Santos.

They love the simplicity of their rural surroundings now and do not miss the noise and chaos of life in the big city, said Sarangani Vice Gov. Jinkee Pacquiao. Her four children are doing really well after she and her husband, Sarangani Rep. Manny Pacquiao, transferred them.

“They’re doing fine. They’re not having any difficulties and they have adjusted easily,” Jinkee said.

The vice governor said that when they informed the children they were being transferred to General Santos City, there was no fuss or outcry.

“They are God-fearing, obedient and respectful,” she said.

The best thing about the decision to transfer the children was “we are always together now unlike before,” Jinkee said.

Living away from their children was not conducive to nurturing a happy family, she said.

“It is a must that we are always there to supervise our children. We need this to strengthen our relationships and to provide them guidance and support, especially when they need it,” she said.

According to Jinkee, the children have been enjoying their life in General Santos, having found new friends, although they recently went to visit their friends in Manila and Laguna.

“Last summer, they visited their friends in Manila after arriving from the United States,” she said.

“I’m always away from the family because of my job, especially during the training camp. She takes good care of our children and I can’t thank her enough for that,” he said.

Jinkee said she would be quitting politics after her term ends next year to focus on her family and business.

“I will no longer be seeking any political position in next year’s elections. I’d like to devote my time and energy to my family and our business,” she said.

“My husband is the congressman of the province. To me, having one member of the family actively involved in politics is already enough. Let’s give others a chance,” Jinkee said.

She said she was leaving politics with her track record unsoiled. Since becoming vice governor in 2013, Jinkee has not claimed her government salary.

“It goes to the solicitations flooding my office,” she said.

According to Jinkee, she is neither hooked on politics nor obsessed with political positions.

“My role was just to maintain the unity and stability of the party. I’ve done my part so I’m leaving politics for good,” she said.

In 2013, her husband chose Jinkee to be the vice-gubernatorial candidate of his party, the People’s Champ Movement (PCM), to put a stop to the bitter rivalry between two close political allies in the province.

Pacquiao’s decision was deemed Solomonic as it prevented the breakup of the PCM party.

Pacquiao said he was also crediting Jinkee for his success as a boxer and politician.

“She’s not only beautiful but also dutiful. I owe her all my success in life,” Pacman said in Visayan.

He said he would have wanted Jinkee to continue with her political career but she had made up her mind.

“She’s doing good as vice governor. She was able to help many people in the province because of her livelihood projects. I wanted her to stay in politics. But I also respect her decision,” he said.

Pacquiao said he also wanted a simple life and would grab every opportunity to experience it.

He likes staying at his beach resort in Barangay Tinoto whenever he’s in the province. He said he could not stand the traffic congestion in Manila.

“Here, the air and food are fresh. Most of all, I get to mingle with simple people,” he added.

The boxing champion stays in a small hut where he sleeps and entertains clients, visitors, friends and constituents.

“This is what I want. It’s simple. On Saturdays, I go home to General Santos City because on Sundays, we go to church as a family,” he said.

The couple’s eldest son, Emmanuel Jimuel Jr., said this was what their parents had instilled in them over the years: “To fear God and to remain humble and respectful to all people.”

“Our dad has been so loving and good to us. He loves our mom so much. We thank them both for showing a good example to us,” said Mary Divine Grace, also known as Princess.

She said the family prayed a lot—about three to four times a day.

“Praying makes us stronger and brings us closer to each other,” she said.

(No typical) Day in the stateside life of Pacquiao