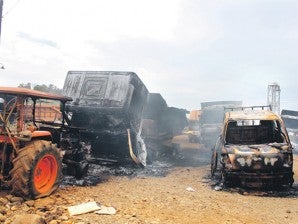 Attacks by the communist New People’s Army on three mining firms in Claver, Surigao del Norte province, are causing jitters in the mining industry and sending the message that investments might not be safe without tight security, the Mines and Geosciences Bureau (MGB) said Tuesday.

“Any assault on a mine is a serious thing. There are investments there. A mining project is capital intensive. If you hear such news of an attack, it’s a cause for worry for the industry,” MGB Director Leo Jasareno said in an interview by phone.

“It’s like the Pearl Harbor of the mining industry,” said the source who conducted an on site inspection of the compounds of Taganito Mining Corp. (TMC) and Platinum Group Metals Corp. (PGMC) in Claver a day after the attacks.

Pearl Harbor refers to the surprise Japanese attack on the US Pacific naval fleet in Hawaii on Dec. 7, 1941, that forced the United States to join the war against the Axis Powers that included Japan and Germany.

An industry source, who asked not to be named, said the coordinated raids damaged about P3-billion worth of property. Interior Secretary Jesse Robredo, however, estimated the damage at $1.5 billion.

Jasareno said the burning of equipment, vehicles and facilities of Taganito Mining Corp., Taganito HPAL Nickel Corp. and Platinum Group Metals Corp. would take its toll on the investment climate in general.

Besides, such attacks threatened the livelihood of thousands of Filipinos employed by the mines, and the revenue of the government, Jasareno added.

“It will definitely have an adverse impact. Investments are placed at risk by such attacks,” said the official, who received a flurry of text messages from stakeholders expressing concern.

“Imagine now an investment without security. While this is an isolated incident, it poses risks to investments,” he added.

In a statement, the Chamber of Mines said the insurgents “may not want to see the kind of development that large-scale responsible mining has to offer since they thrive on poverty as it swells their numbers.”

Rocky Dimaculangan, vice president for communications at the Chamber of Mines, said the communist rebels’ threats to launch attacks on other mining sites were a cause for concern. But he said mining companies would continue to invest in the Philippines given government support.

“Chamber of Mines members are determined to pursue their projects as long as we have the support of the government and our host communities,” Dimaculangan said.

The military claimed that the three mining firms’ refusal to pay “revolutionary taxes” prompted the attacks. But a rebel leader said that the mines violated the group’s policies on the environment by destroying the environment and maltreating their employees.

There are 30 metallic mines across the country including 10 in Surigao.

The Philippines is the world’s fifth most mineralized country, with large reserves of minerals, including gold, copper and nickel. But extraction and production has been slow, hampered by bureaucracy and red tape and a concerted campaign by environment activists against mining.

The Philippine Coast Guard (PCG) said the MV Con Carrier-7, a cargo ship of Aleson Shipping docked at Taganito Mining Port, was also bombed by the rebels at around 11:40 a.m. on Monday after they ordered the crew to disembark.

The ship was loaded with 9,000 liters of fuel oil, 368 liters of lube oil and 138 liters of hydraulic oil. All the 19 crew of Con Carrier-7 were safe, according to PCG spokesperson Lieutenant Commander Algier Ricafrente.

Ricafrente said five foreign vessels anchored about five kilometers north of Taganito had been advised to proceed to a safer area near Hikdop Island north of Surigao City or near the city port.

The smelting plant, a joint venture of TMC and Sumitomo Metal Mining Co. Ltd., was expected to be completed next year at a cost of $1.4 billion and would have been fully operational in August 2013. Taganito’s nickel-processing plant is the single largest investment in the country’s minerals sector to date, according to the Chamber of Mines.

Matugas said the attack crippled at least 70 percent of the facilities of TMC, HPAL and PGMC in Claver, which lies 60 kilometers southeast of this city.

“The damage wrought by the attack and the fear among foreign consultants and local workers that followed made it impossible for the company to immediately restart operations despite the presence of additional military troops in Barangay (village) Taganito-the mine area,” Samson said.

The Philippine Daily Inquirer learned that PGMC, which is based in nearby Barangay Cagdianao, was also temporarily suspending operations.

Nickel Asia Corp., the Philippines’ top nickel producer, will divert output from two mines to cover ore shipments from its Taganito mine.

The company also plans to hire equipment from other firms to replace machinery destroyed in the raid, allowing it to ship stockpiled ore from the Taganito nickel mine.

Shares of Nickel Asia on Tuesday dropped by 13 percent in early trading on the Philippine Stock Exchange after the mine operator suspended activities because of the attack. The stock ended the day down 2.55 percent.

Matugas said some 5,000 workers directly hired by the three mining firms would be displaced by the suspension of their operations.

TMC alone, which has announced it was suspending operation, employs more than 1,000 workers.

Matugas said the attacks would surely discourage investments in the province and would stunt the province’s aggressive tourism programs.

The attacks occurred at a time when the International Surfing Cup—participated in by a dozen American, Australian and Japanese surfers—was wrapping up in Siargao Island, she said.

But Robredo, who went to Claver yesterday, said the attacks were “isolated” and were meant as a “show of force” by the New People’s Army.

He said he was hoping that the mining firms would realize this and resume operations.

The government plans to “further fortify” security in the mining sites by adding more troops, according to Robredo.

Jasareno said that it was the call of the Armed Forces of the Philippines to secure the mines.

The Philippine Mine Safety and Environment Association condemned the attacks.

“We appeal to the government for protection of mine operations and sound investments which contribute the needed taxes to improve our economy as well as provide livelihood and jobs for poor Filipinos, among others,” Louie Sarmiento, president of the association, said in a statement.