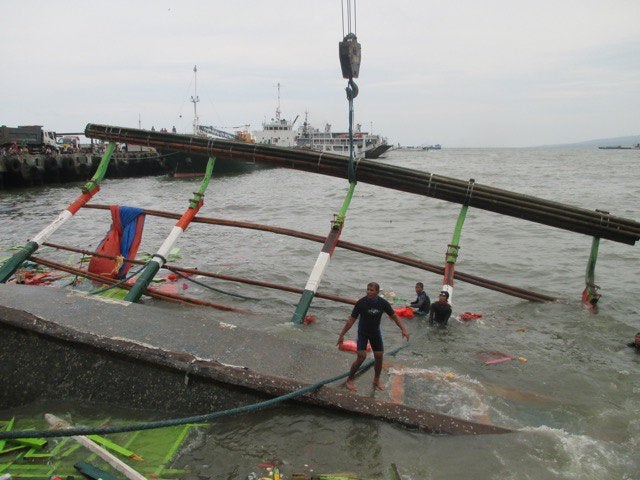 ORMOC CITY, Philippines—Fear has gripped the surviving passengers of MB Nirvana, who are now afraid to set foot on another motor banca after the sea tragedy on Thursday.

“I wouldn’t let my mother ride a boat now. I’m afraid for her,” said Ferlen Laroya, whose mother, Verlena, was one of the survivors of Nirvana, which was bound for Pilar town on Camotes Island, east of Cebu, when it capsized one kilometer away from the port here on Thursday.

Verlena, 46, said she made it through the strong winds and big waves because she followed the advice of her husband: “Never sit in the middle of the motorboat.” She sat in the back.

When the boat capsized, she held on to a section of the boat and never let go until she was rescued about 30 minutes later.

A vessel of the Philippine Coast Guard (PCG) arrived in Ormoc on Friday to take the survivors back to Pilar town but the trip was canceled Saturday because only seven were willing to take another boat ride home.

Pilar Councilor Wilo Angus said at least 20 survivors signed up for the trip but backed off after seeing the strong waves at the pier area.

He said the trip was reset for Sunday, when the sea is expected to be calmer and survivors might change their minds and take the boat trip.

The death count was bigger than the 45 reported by the Coast Guard, which was based on the ship’s passenger list, although the guard counted the same number of survivors.

“The number of fatalities is still subject to verification,” PCG spokesman Armand Balilo said in a phone interview.

Balilo confirmed that the Eastern Visayas District of the PCG reported that the death toll rose to 59 as of Saturday.

The figures put the number of people on board at 199, which was beyond what was declared by the captain of Nirvana.

“(The captain) insisted that they only had 173 passengers as reflected in the manifest submitted to the PCG,” Balilo said, adding that there were 18 crew members on board.

Coast Guard personnel on rubber boats continued to scour the seas for the missing passengers.

“We will assess the situation and when there are no more bodies recovered, I will recommend to terminate the search and retrieval operations,”said Eastern Visayas District Commander Capt. Pedro Tinampay.

Flowers for the dead

On Saturday afternoon, a Mass officiated by Ormoc parish priest Fr. Gani Petilos was held inside the ferry terminal, where rescued passengers and government officials threw flowers into the sea to show their grief and love to those who died in the tragedy.

In his homily, Petilos urged the concerned agencies to conduct a thorough investigation on the incident.

“We have to look, search and give justice to those who perished and those who are still missing,”he said.

A four-member team created by the Coast Guard Manila to conduct a probe on the sea tragedy arrived in Ormoc on Saturday.

They inspected the wooden passenger boat, which had a gross tonnage of 33.58, width of three meters and length of 27 meters.

The Coast Guard earlier said the 33-ton ship could carry 194 people including 178 passengers and 16 crew, but according to the casualty count of the city council, the ship was carrying at least 198.

“The ship might not be too overloaded in terms of passengers, but imagine the weight of its cargo,” Ebcas said.

Each sack of rice, cement and fertilizer weighs 50 kilos (110 pounds) and 150 sacks would easily add 7,500 kilos to the ship’s load, excluding passengers, he said.

Ebcas said survivors saw that the cargo, located on the ship’s lowest level, was not fastened to the floor with ropes as it should have been.

“This could have caused the weight of the ship to shift,” said Ebcas.

Passengers on the ferry’s regular route from Ormoc to the Camotes Islands regularly bring supplies from the city to their remote fishing villages.

Search operations with rescue divers were stopped on Friday before the ship was lifted to port’s berthing area.

Ebcas confirmed reports that some bodies had washed up on the shore of a neighboring municipality.

With the discrepancy in the reports, the PCG has not yet ruled out the probability that the vessel could be overloaded with passengers and cargo.

Ebcas told AFP that survivors reported seeing up to 150 sacks of cement in the ship’s cargo area before it capsized.

Multiple murder charges were filed against vessel owner Joge Bung Zarco, skipper Warren Oliverio and 14 crew members who had been under the Coast Guard custody since Thursday.

The police used the affidavits of some survivors who blamed Oliverio for the tragedy, saying the vessel made a sharp turn, causing it to capsize.

Balilo said the management of the sunken vessel had secured a certificate to operate from the Maritime Industry Authority (Marina) and a copy of which showed it was signed on Feb. 25, 2015, by Maristel Letigio, head of Marina in Region VIII.

The captain of the vessel who has 10 years of experience and had previously operated four similar boats in the Visayas was also granted a license to operate the ships, the PCG spokesperson said.

Engineer Rodolfo Paner, Marina-Eastern Visayas supervising maritime industry specialist, said he met with the survivors inside the ferry terminal on Saturday to discuss the facilitation of their insurance claims.

The coast guard is investigating the latest in a string of deadly sea mishaps. Transportation Secretary Joseph Emilio Abaya said the ship’s crew would be summoned.

“If there was negligence, it should be pursued by investigators. Appropriate charges will be filed when necessary,” presidential spokeswoman Abigail Valte told reporters Saturday.

Interior Secretary Mar Roxas also flew to Ormoc on Saturday afternoon and promised the survivors that those liable for the sea mishap would be held accountable.–With a report from AFP

At least 36 dead as ferry capsizes off Ormoc City

Read Next
DOJ: Bail order bad for war vs drugs
EDITORS' PICK
Nograles: Cabinet members to donate 75% of monthly salary to aid COVID-19 fight
10 Filipinos positive for COVID-19 in UK, 7 in Ireland — envoy
Diokno to Duterte: OK to make fun of buck tooth, but focus on people’s needs first
IATF to LGUs: Issue ordinances vs attacks on frontliners, COVID-19 patients
Robredo spox thanks Duterte for defending VP’s efforts vs COVID-19
Quick chat with Nicole Andersson: ‘You really don’t need much to be happy’
MOST READ
Coronavirus hotbed Rizal to shut borders on April 6
Sotto on Isko Moreno’s call: We do our job without the media following our every move
‘Money Heist,’ ‘Tales from the Loop,’ ‘Killing Eve,’ ‘Never Have I Ever,’ ‘After Life’: Five not-to-be missed series this April
ADB warns PH against prolonged lockdown
Don't miss out on the latest news and information.