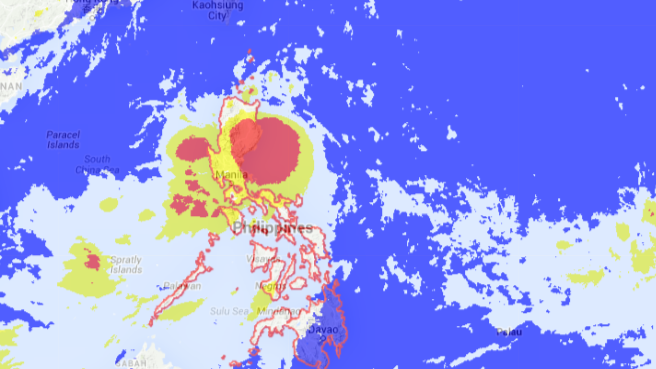 Tropical Storm “Egay” has made a landfall over Palanan, Isabela, the state weather bureau said Saturday night in its 11 p.m. bulletin.

The Philippine Atmospheric, Geophysical and Astronomical Services Administration (Pagasa) said Egay was moving west northwest at a faster speed of 11 kilometers per hour from the previous 9 kph. It was last spotted in the vicinity of Palanan, Isabela, as of 10 p.m.

It continued to pack maximum sustained winds of 95 kph and gustiness of up to 120 kph.

It will finally be outside of the Philippine area of responsibility (PAR) by Wednesday afternoon, Pagasa said.

Metro Manila and other parts of the country will experience rain and thunderstorms as Egay will continue to enhance the southwest monsoon, Aurelio said in a press briefing.

“Due to the southwest monsoon enhanced by Tropical Storm Egay, Metro Manila, Bicol, Calabarzon and Mimaropa will have cloudy skies with moderate to occasional heavy rains which may trigger flash floods and landslides,” Aurelio said.

Meanwhile, another tropical storm is expected to enter the PAR on Wednesday or Thursday.

Tropical Storm “Chan-Hom,” which will be named “Falcon,” will enter through the upper-right corner of the PAR, Aurelio said.

But it will not “make landfall and no area will be affected because it is far,” he said.

Meanwhile, six Cebu Pacific flights were canceled on Saturday due to inclement weather.

In an advisory, the Manila International Airport Authority said the Manila to Busuanga and Manila to Tuguegarao flights and back were canceled “due to the monsoon rains brought by Tropical Storm Egay.”

‘Egay’ slows down but intensifies; signal No. 2 up in 8 areas

‘Egay’ picks up speed; NCR, 3 other regions to get heavy rains

Read Next
Survivors won’t go home again by sea; deaths hit 59
EDITORS' PICK
Writers’ groups join outcry over KWF move
Powered by style, innovation and passion
Authors unbowed after gov’t ‘purge’ of books
House energy committee chair Arroyo bats for cheap electricity
Taiwan’s foreign ministry thanks U.S. for maintaining security in Taiwan Strait
A laptop that maximizes your WiFi so you can maximize your productivity
MOST READ
Arjo Atayde reveals proposal to Maine Mendoza was ‘more than a year’ in the making
Angelica Panganiban, Camille Prats recall ‘trauma’ of being called out for weight gain in ‘G-mik’
‘FPJ’s Ang Probinsyano’ officially ends after nearly 7 years
Most wanted person in Cebu arrested — PNP
Don't miss out on the latest news and information.