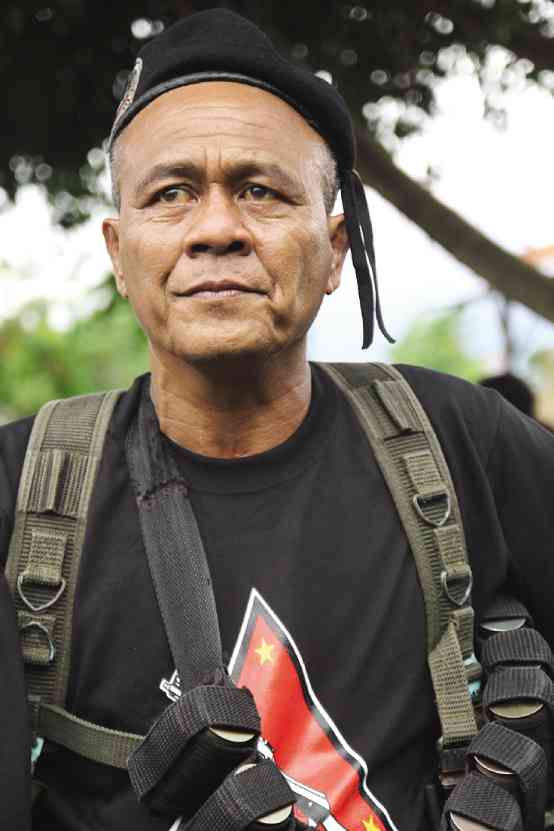 The military described him as a “bandit,” a “notorious criminal.” But to the people who knew him, the elusive New People’s Army (NPA) leader Leoncio Pitao, popularly known as “Commander Parago,” was a friend, a husband, a father, an icon and a fighter for the poor and the oppressed.

Only hours after news of Pitao’s killing by soldiers broke out, the outpouring of sympathy from anonymous supporters and prominent political leaders came to his family.

Aside from Mayor Rodrigo Duterte, who ordered Pitao’s body be moved to Cosmopolitan Funeral House from Rivera Funeral Home in Lasang, where the military first took him, former Mayor Sara Duterte and Vice Mayor Paolo Duterte were among the first to offer their sympathies in the form of wreaths.

On social networking site Facebook, some journalists posted their photos with Pitao.

One of those who arrived at Pitao’s wake on Tuesday, former Mindanao Business Council chair Joji Ilagan Bian called him a friend, fighting for a cause she happened to believe in, too.

Bian, a business leader for most of her life, found the most unlikely supporter when she ran for a House seat in the second district in the last elections when the NPA released a statement against political dynasties, favoring her over the entrenched Garcia clan.

“He wanted better lives for our people, which have been elusive because of corruption and the lack of empathy by the government,” Bian said in an interview.

“But we chose different paths,” she added.

“Commander Parago chose his path and died fighting for a cause and a dream,” she said. “He was deeply loved and respected by the poor for many reasons, but he also had many enemies.”

“He is a symbol and a victim of social injustice that prevails in our country today,” she said.

For his family, Pitao might be a husband and a father who was always absent but only because he chose to fight for a kind of change that would have a far bigger impact than his own family rising from poverty.

Even at the height of his anguish over the abduction and death of his 20-year-old daughter, Rebelyn, a nurse who was tortured and killed in 2009, Pitao did not waver in his commitment to the revolution, Rigoberto Sanchez, spokesperson for the NPA Southern Mindanao Command, said in a statement.

His daughter’s death followed the killing of Pitao’s brother a year before. Danilo Pitao, who changed his family name to Santiago supposedly to avoid any association with the rebel leader that might complicate his work, was courted by military intelligence agents to track down his brother. But after years of befriending him failed to yield results, Danilo was assassinated in broad daylight in Tagum City.

“If the military thinks they have weakened me because of the death of my daughter, they are wrong,” Pitao was once quoted by reporters in an interview days after Rebelyn’s death.

He never left the movement even at the height of his ailment, when his comrades advised him to take a sick leave and seek treatment in the city for hypertension and diabetes. Instead, he continued working with the people, separating himself from the main combat unit that he formerly headed.

Sanchez called Pitao’s dedication to the cause of national democracy “unstinting,” recalling the time when Pitao was offered a P5-million reward to turn against the revolution, but which he turned down.

The NPA credited Pitao with countless attacks on military targets in the 1980s and 1990s that led to firearms being seized by rebels.

One of his most recent successful missions was the raid on the Davao Penal Colony, which gave rebels additional firearms but with no deaths on the side of government or of the rebels.

A man who arrived at Pitao’s wake on Wednesday sketched a portrait of the rebel leader using a pencil and gave it to the family as a gift.

“Even if [you’re dead], you will remain alive in our minds,” the man wrote on a piece of paper.

“The fight for real change will continue,” he wrote, hailing Pitao for devoting his life to the revolution.

Pitao’s body and that of Vanessa Limpag’s, the medic who died with him in the military raid on Sunday, are lying at Cosmopolitan Funeral House. They will be moved to the Almendras gym for public viewing on the weekend, before they are buried separately on Monday, July 6.

Limpag’s body will be brought to her hometown in Zamboanga. Surrounding the two coffins are wreaths from the Davao City police office and from several city councilors who came to the wake.

Pitao, who carried a P5.6-million bounty on his head and had been on the military’s most wanted list, had eluded capture for years until his death in Barangay Panialum, Paquibato district, on Sunday. He spent 37 years of his life with the NPA, where he headed Pulang Bagani Command 1, based in Paquibato.

For his wife of 31 years, he was a husband and a father who chose to sacrifice the comfort and warmth of life with his family to dedicate his life to the revolution.

“He used to tell me to prepare myself for his death because in his kind of work, he said, he would surely die,” his wife Evangeline said.

To his sister-in-law, who knew him since he was a boy, Pitao was a kindhearted soul forced to join the movement because of the injustice he had witnessed during martial law.

“We never regretted that he joined the revolution,” the sister-in-law said.