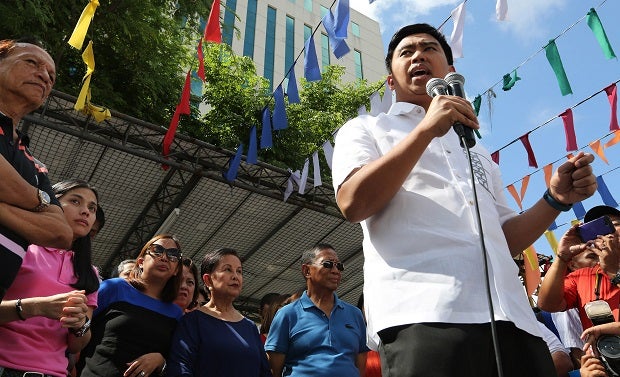 Suspended Mayor Jejomar Erwin “Junjun” Binay of Makati and other city officials are facing charges for the alleged payment of salaries and benefits to an employee who disappeared last year after the Senate opened an investigation into charges of corruption against Vice President Jejomar Binay, the Inquirer learned on Saturday.

Besides Mayor Binay, those who will be called to account for the alleged payment of salaries and benefits to Eduviges “Ebeng” Baloloy are City Administrator Eleno Mendoza and human resources department chief Marie Aldon, according to Leonor Baitec, administrative officer for Acting Mayor Romulo “Kid” Peña.

Baitec said the officials would be asked to explain why Baloloy was paid her monthly salary and retirement benefits despite not reporting for work for six months.

She said the new city administration was gathering documents and studying what charges to bring against the officials involved.

Baloloy is a longtime secretary of Vice President Binay. Former Makati Vice Mayor Ernesto Mercado has told Senate investigators that it was Baloloy and another longtime aide of Binay, Gerardo “Gerry” Limlingan, who allegedly received from him bags containing millions of pesos in kickbacks for Binay from corrupt infrastructure deals when the Vice President was mayor of Makati.

Baloloy and Limlingan disappeared after a Senate blue ribbon subcommittee opened an inquiry into official corruption in Makati.

The Inquirer learned on Friday that City Hall continued paying Baloloy her monthly salary in cash despite not reporting for work.

A City Hall source told the Inquirer that Baloloy retired sometime during her disappearance and received a check covering her benefits and leave credits on Monday, two days before Mayor Binay stepped down after being ordered suspended for six months by the Ombudsman over alleged overpricing in the construction of Makati Science High School.

“The records show that her salary was received every payday and her retirement benefits, including terminal leave and other benefits, were given to her and received [two days] before Mayor Junjun stepped down,” the source told the Inquirer on Friday.

Informed about the ongoing investigation on Saturday, Joey Salgado, spokesman for the Binays, played down the plan of Peña’s administration to bring charges over the alleged irregularity.

“We already expected that they would come out with all types of allegations and stories,” Salgado said in a text message.

Benefits not yet paid

Citing information from Aldon, he said Baloloy had not received her retirement benefits.

“She only filed her application for early retirement, which [Mayor Binay] accepted. There is a process before anyone can get [their] benefits. [Clearance] is needed from different departments,” Salgado said.

Asked about the payment of Baloloy’s monthly salary, Salgado said: “Again, she has been in service for so long she has earned substantial leave credits. We will take appropriate actions against the lies.”

Baloloy and Limlingan are wanted by the Senate for ignoring summonses to the blue ribbon subcommittee investigation into alleged corruption in the Makati city government involving the Binays.

An Anti-Money Laundering Council (AMLC) report released by the Court of Appeals (CA) in May showed that Baloloy and Limlingan held individual and joint accounts containing hundreds of millions of pesos in deposits and that they began emptying those accounts, selling securities and preterminating time deposits, investment placements and cashing checks for hundreds of millions of pesos after the Senate inquiry began.

The court ordered a freeze on 242 bank accounts belonging to the Binays, Baloloy, Limlingan and other alleged dummies for the Vice President.

The payment of Baloloy’s salary despite not reporting for work shows she remains controlled by the camp of Vice President Jejomar Binay, according to Sen. Antonio Trillanes IV, a member of the blue ribbon subcommittee.

The subcommittee has failed to find Baloloy and Limlingan despite the issuance of warrants for their arrest.

Binay’s camp says the Vice President has not seen Baloloy and Limlingan for a long time, but the Inquirer’s report that Baloloy collected her monthly pay despite not reporting for work caught Sen. Antonio Trillanes’ attention.

“It shows that Ms. Ebeng Baloloy is still being controlled by the Binays and that she is one of the thousands of ghost employees of the Makati local government,” Trillanes said in a text message to the Inquirer.

Some of those ghost employees, he said, could be fictitious names on the city payroll or real people who do not work for the municipal government but instead render personal services for the Binays, like Baloloy and the workers at the 350-hectare agricultural estate in Batangas province allegedly owned by the Vice President.

In a radio interview on Saturday, Trillanes said he still believed Baloloy was no longer in the country.

“Having salaries and benefits paid does not mean Baloloy is still here,” he said. “It only means someone is [collecting her] salary on her behalf.”

The Bureau of Immigration said last week that it had no records showing Baloloy and Limlingan had left the Philippines.

Citing information from a reliable source, Trillanes said Baloloy did not go through immigration, hence the absence of departure records.

It was not the first time that people trying to evade the law went around immigration in leaving the country, he said.

Trillanes said he was investigating to determine Baloloy’s whereabouts.

He also said he was securing documents from Makati City Hall now that Mayor Binay had left it after being suspended by the Ombudsman.

The senator said he had obtained documents from other sources about practices in the Makati city government that he planned to present in coming hearings by his subcommittee.–With a report from Kristine Felisse Mangunay