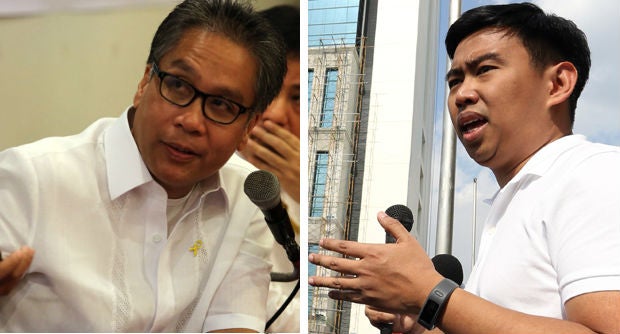 (You don’t own Makati, Mayor Binay. No one rules it except for laws. The rule of law prevails there and the DILG and the PNP are just carrying it out.)

Violence broke out at Makati City Hall after DILG officials served the suspension order. They were prevented from entering the city hall so they just posted the order at the building’s entrance.

(I am calling on Mayor Binay to step down. This is not a telenovela. This is not a drama about your family and your reign in Makati. This is about the law. And the law says you have been suspended by the Ombudsman.)

Roxas said that Vice President Jejomar Binay, father of JunJun, could help by telling his son to follow the order. He added that the Makati mayor is no different from other officials included in the suspension order.

(The law prevails. There are no sacred cows here. Mayor Binay is special only to his father. He is not the law. We are going to implement the law.)

The Interior Secretary also said they will file charges against the people involved in the violence which erupted in the city hall.

(The PNP will ask media networks a copy videotapes. We will see who collared whom, who punched whom, and who pushed a female police officer. All of these were caught on video.) IDL