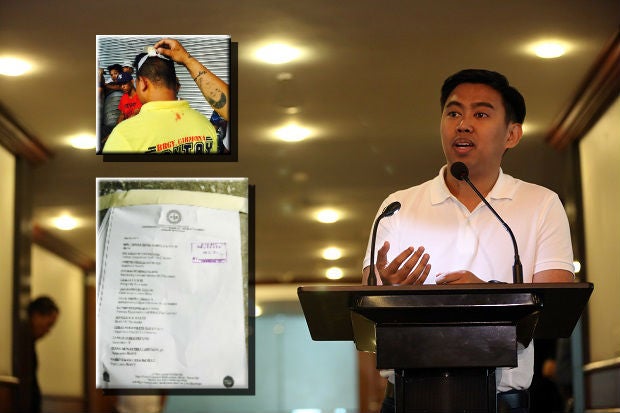 Mayor Junjun Binay, (top inset) a supporter who got injured when the DILG posted the suspension order (bottom inset) at the entrance of the Makati City Hall. INQUIRER FILE PHOTO and INSET PHOTOS BY RUEL PEREZ/RADYO INQUIRER

Violence erupted Tuesday at the Makati City Hall after the officials of the Department of Interior and Local Government (DILG) served the suspension order against Mayor Jejomar Erwin “Junjun” Binay.

The DILG officials serving the suspension order were not allowed to personally provide the order so it was posted at the entrance of the city hall.

Tension started to arise after supporters threw bottled waters and chairs to police authorities in the area.

Earlier, tension also broke out between police and Makati City Hall employees when the latter were prevented from entering their office.

Thousands of supporters trooped to the city hall as early as Monday after the Ombudsman issued Binay’s second suspension order over the alleged Overpriced Makati City Science High School.

A defiant Binay, however, remained holed-up in his office refusing to acknowledge the suspension order. IDL